Finally a quiet and normal week at home….well almost!


You know it has been such a long time since we had a normal quiet week at home where nothing much is happening that I have almost forgotten how good it really feels when things at home are quiet and…some might even say boring.

So yes this week has been rather quiet and not much has happened….hoomins, well at least one of the hoomins is working as he has been since last year they’ve started working from home instead of going to the office and the other one not as much (less so as she is still recovering) but still catching up with some work and other things that they need doing (I most definitely like the fact that my hoomin is fast catching with the cooking and baking part of things…things are so much better now).

Which of course all this normal, day to day routine means that I finally get a lot of time to meowself to catch with my own normal routine such as proper snoozing which it had somehow suffered a bit before when the hoomin wasn’t well and wasn’t around for a while or when strange people where visiting for a while to check on her when she came back home…Those were really stressful times as I was not only worried for my hoomin I had to tolerate the presence of those strange looking and smelling from outside hoomins who I didn’t like especially the sounds and smells they were bringing at home when they were visiting while and at the same time I had also to keep checking on the hoomin as well meowself…you can’t really trust those hoomins at least not all the time of course. So yes all these previous months my snoozing and general day to day routine suffered a lot of disruptions and with Tolkien also around who sometimes as you’re probably are aware acts like he has no brain at all having time to snooze or do anything ‘normal’ it was almost impossible (By the way you can still read about meowself and Tolkien’s life at home and of course all about the good times we’ve used to have at home in the good old days before March 2020 arrived when hoomins behaved like hoomins and they’ve used to go outside often...in the hoomins comic Life with Ozzy.. and Tolkien available on Amazon.

This is why now I really appreciate these quiet and boring weeks we are having when the only things that I have to do is eat, snooze and keep an eye on Tolkien and not so much on hoomins anymore…

There is also of course certain consequences to be expected when things are going back to normal such as false and exaggerated accusations for example of being a bully with Tolkien (or even to the hoomins apparently…) and not letting him eat some of the food the hoomins are getting for us. You see it’s not that I don’t let him eat but simply that he doesn’t seem to like that new food and therefore it is such a pitty to leave it as it’ll otherwise get spoiled and then wasted…so you see I make sure that this new and delicious new food is not get wasted….once again being a considerate and caring cat as always.

Now and when it comes to bullying again I do not bully Tolkien I simply guide him when he is doing something that is clear wrong or he is likely to cause chaos and when he makes a lot of mess. Because and let’s face it Tolkien does make a lot of mess especially when he plays and hoomins don’t really like it…Also and when it comes to all all that fur that apparently are keep finding on the floor once again is not my doing honestly…Tolkien has so much fur now that he is older that a lot of it is coming out….on its own….you know without meowself attacking or biting….When we do play we are not aggressive with each other….we simply have a little chase around the house, you know doing a bit of exercising and running, that’s all. Of course Tolkien likes to over react sometimes to get the hoomins attention so therefore he’d then meow and act like he is being tortured by meowself to get the hoomin to come to his aid and for meowself to get the blame for all the disruption and mess….oh well what can you do? Just tolerate Tolkien and being extra cute with the hoomins which seems to always work quite well.

Well that’s all for this week…getting a bit late and it’s time for dinner as it seems to be getting late and hoomins to have forgotten that is already dinner time! 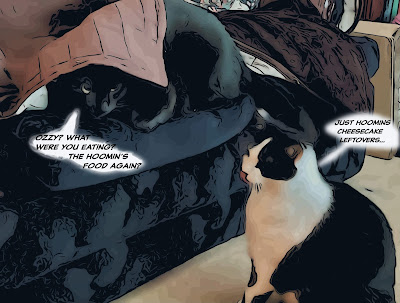 Ozzy and Tolkien would like to ask you to donate if you could so to help us with the ever expensive vet bills of our senior cats so they can have a good old age.  So please Paypal Ozzy and Tolkien’s hoomin. Thank you!