These hoomins and their peculiar sometimes ideas....which a cat can’t always explain!

So here we are again, another week has just passed and things haven’t changed much. Which of course is a good thing for a cat like meowself who doesn’t like changes after all, small or big. So my hoomins are still at home full time, apparently working and not going out very often, well at least as they’ve used to because things out there in the hoomin world haven’t gone back to normality as yet, it seems. Which again and I’ve said it many times before I don’t really mind, I like it when hoomins are at home and I’m not one of those cats that they want their hoomins to go back to their work and leave me at home all alone (OK with Tolkien too. By the way you you can still read about our life at home and of course all about the good times we’ve used to have at home in the good old days before March when hoomins behaved like hoomins and they’ve used to go outside often...in the hoomins comic Life with Ozzy.. and Tolkien available on Amazon) for hours....nope I prefer the hoomins to be at home to serve meowself when I need them. Of course I don’t really mind it when they spend some time doing what they call work....they need some purrsonal time to themselves and besides I do have meowself things to do as well like...snoozing undisturbed for example.

But of course there are a few small things really  that they can be rather annoying....sometimes, such as being accused by the hoomins of doing certain things at certain times and which things are so out of my character to be remotely true (it might be of course that they are suffering from some form of mental fatigue and they haven’t as yet fully adapted to this new way of life and therefore they are simply imagine those things they say that I do….hmm more likely I think).

You know such things such as meowself becoming very vocal and even meowing to meowself at night time when I’m on my own because I want the hoomins or Tolkien to give me attention which of course isn’t true. I don’t meow or do any cat singing at night time as there is no reason for meowself to do so. I don’t know what they think they can hear at night but definitely it’s not meowself....I don’t get too excitable and playful when the hoomins go to bed and most definitely I don’t snore that loud the hoomins can’t sleep or they can’t even hear the TV or that I’m even keeping Tolkien awake sometimes....I mean this utterly nonsense! I’m only a cat after all and cats don’t snore well at least they don’t snore that loud...I do admit that I might occasionally purr a little loud but this is just a nice and comforting purr and it is more than a lullaby so soothing that can help anybody go to sleep!

So these are just false accusations and confusion from the hoomins’s part....I don’t know why they are making up all these lies just to have some fun with me but I’m not going to fall for these silly games they are trying to play with me to entertain themselves.

And most definitely I’m not going to help them with their exercising anymore....Besides they seem to be getting the wrong idea after all and start thinking that I want to join them as well too. I  don’t of course. There is no way that I’d start doing any of these silly hoomin things like yoga to keep meowself healthy and fit. I’m the picture of health and fitness after all, an excellent example of purrfect cat physique....and I’m not in anyway fat or I have a fat belly.....hoomins have no idea what a fit cat should like. Besides I only wanted hoomin to give me a little scratch and to keep him company while he was working out and not to take part in his silly exercising game....silly hoomin, again!

And of course amongst all these horrific events Tolkien seems to be getting worse as well as he now appears to be taking the hoomins side too and allowing them to blame meowself for all the naughty things he does....as he now has figured out how to use the cute card too. But of course this doesn’t stop him from still doing silly things such as falling off from the bed....twice...he is after all too long and stretches too far when he sleeps on the bed....of course this is not really an excuse for falling off the bed as this is something that not even the silly hoomins would do....silly cat!

He is also not so keen on this hot weather too it seems and he tries all these silly ways to keep himself cool like playing carpet in front of hoomins feet and hoomins are not very happy when they have to play cat twister with him....especially in the kitchen and in particular when they are trying to cook or bake....

He has also now developed this weird habit too and he starts growling when he sees hoomins passing outside as he prefers birdies and squirrels to hoomins he says....well it is a good thing that he doesn’t have to go outside I say as they are a lot more hoomins out there....annoyingly. It was so much better when there were hardly any hoomins out there....because I do admit it I’ve used to like it when there were only birdies and that annoying pesky squirrel outside in the good old days.....

Anymeows better go....it’s time for my singing to start it seems.... 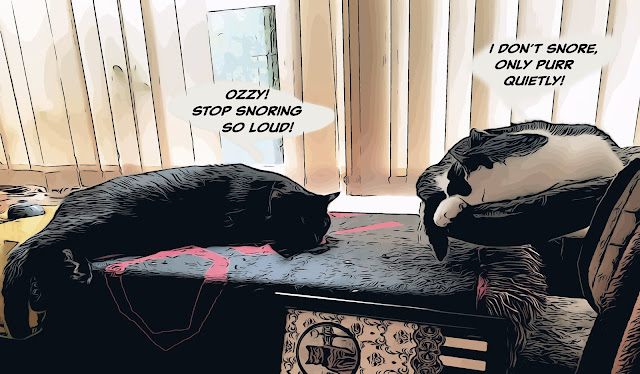 Email ThisBlogThis!Share to TwitterShare to FacebookShare to Pinterest
Labels: cats

There are so many ways that you can entertain your now always at home hoomins!

Here I’m showing hoomins some proper yoga poses....upward cat! So here we are again and another week has just passed and hoomins as always a... 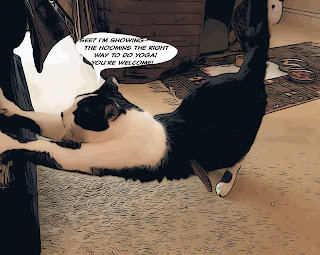