Trick or Treat…Halloween is here and so at last are Ozzy and Tolkien!!! 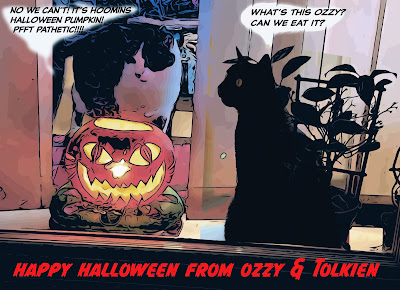 Yes, yes I know it has been such a long long long time since the last time I’ve posted anything and there were good reasons for that long absence, mainly though because of some serious health issues with one of my hoomins had for some time. Yes as one of my hoomins wasn’t very well for a long time, meowself, like the responsible and caring cat that I’m I had to take some time out from my other admin duties to take care of my hoomin. As you understand simply I couldn’t of course leave such an important task to be carried out by the other hoomin on his own or Tolkien of course….good grief Tolkien, yes he’s still around and he is still as bad and stupid or some might even say worse than he was before. No change or improvement here I’m afraid (By the way you can still read about meowself and Tolkien’s life at home and of course all about the good times we’ve used to have at home in the good old days before March 2020 arrived when hoomins behaved like hoomins and they’ve used to go outside often...in the hoomins comic Life with Ozzy.. and Tolkien available on Amazon).
So yes we had at home some trying times and things were rather too busy for meowself for months so I had to neglect some of my normal duties like weekly updates on my blog since my purrsonal assistant was unavailable to assist (it’s so hard sometimes to find a good hoomin assistant) but thankfully now things seems to be getting somehow back to some form of normality so I can start once posting updates hopefully on a weekly basis as before….
So here we are again with Halloween around the corner and with the hoomins behaving unfortunately silly again. You see I have no doubt that they’ll start playing once again with their favourite fruit, what they call the 🎃 (notorious pumpkin). I mean seriously why do they have to go through this ritual every year? They’d soon start to argue about how to carve it so to make it look scary and they never seem to agree on a particular design (and believe me a cat design never looks scary in my opinion) and then they’d also disagree on how to cook the stuff that they’ve taken out of that pumpkin, which doesn’t look very nice to eat in the first place. Yuk!
Who wants to eat that horrible orange squashy thing anymeows? No cat with some common taste buds I can think of (although I’m pretty sure that Tolkien would have a taste anymeows as he likes trying everything he sees these days along of course with his flavour snacks, plastic and cardboard). Hopefully though logic and common sense would prevail and the hoomin would go as she usually does every year with the best solution, the cheesecake option…yum! I do like my hoomin’s cheesecakes…and by the way that paw print last yeas it wasn’t an evidence…really, it just look like a cat paw (not meowself’s).
And then of course there is the the pumpkin itself left by the hoomins afterwards on the window with all lit up and my efforts to then to try to keep Tolkien away from it and from the window as I’m trying to explain to him that this is something that you can’t really eat or put your head into it…oh well at leas it’s only for one day and after all those months of not being able to o anything that it looks like normal or old routine I shouldn’t really complaining about this…let the hoomin have their fun I guess…they do deserve it after all.I shouldn’t e complaining really.
AnymeowsI think I better go now…I’ve got things to do…like to check that new toy that hoomin seem to have got me (for meowself not Tolkien although I would let him play with it for a while)and I would tell you all about it hopefully next week…
Have all a nice Halloween …
Till next time Purrs and Meows
Before you go and if you want to check that mentioned above comic...Life with Ozzy and.. Tolkien is now available to download or buy on Amazon.
Ozzy and Tolkien would like to ask you to donate if you could so to help us with the ever expensive vet bills of our senior cats so they can have a good old age. So please Paypal Ozzy and Tolkien’s hoomin. Thank you!
Don't forget to check my hoomin's site on Cat Behaviour if you want some advice...hoomin says that I am really good at giving good advice to hoomins!
at October 29, 2021 No comments: