Hoomins sometimes can be sooo difficult to train....it seems!

So another week has just passed and as far as I understand it all hoomins are still indoors as we don’t see many walking outside and they are still a lot of birdies and stupid squirrels outdoors instead, which is always a good thing of course!

You know by now that we have (mostly meowself and Tolkien that is) a squirrel problem with that pesky one that he keeps coming to steal the birdies food (there are many pictures available of his terrible behaviour of course that show how bad he really is) and who doesn’t seem to be taking any notice of us or even the hoomin when we are trying to scare him off. Nope he never seems to take any notice no matter how hard Tolkien always tries to get him...because that pesky squirrel is quite clever (a lot clever of course than Tolkien) and he knows that Tolkien or even the hoomin can’t really get to him because they are inside and he is out there! But now and rather annoyingly he has also started bringing his family too and some of his family members especially some of the younger ones don’t seem to be as clever as he is as they seem to be gathering instead of bird food or nuts small stones which they even appearing to try to bury them outside. A behaviour of course which seems that Tolkien finds very interesting and even for his own standards rather bizarre...

Of course watching squirrels outside it’s not the only thing that I’m spending most of my time doing all the time (unlike Tolkien of course...by the way you can still read about our life at home and of course all about the good times we’ve used to have at home in the good old days before March when hoomins behaved like hoomins and they’ve used to go outside often...in the hoomins comic Life with Ozzy.. and Tolkien available on Amazon) as I also need to keep an eye on my hoomins inside as well especially now that they are at home all the time and they are often doing things that they need a bit of assistance from meowself (you know how hoomins are…not capable of achieving anything really by themselves). But unfortunately this past last week has proven to be a rather strange week after all as the hoomins have kept themselves very occupied with their new gadgets/toys which they’ve just recently got and as a result they’ve also seem to have forgotten that we do still exist....But I guess it was to be expected they were due this time of the year to get some new toys after all and if those toys seem to make them happy, well…they are then allowed now and then to be a bit forgetful....and rather obsessive perhaps for at least a little while! After all all they have been working rather hard all this time and they do deserve to have some new toys to play with! But of course and if this obsession does last any longer then I might have to take some drastic action to bring them back to their senses and to remind them of their duties....you know I don’t like being ignored and being replaced by a small bright object that makes some strange noises and which hoomins seem to be holding in their hands all the time now! It is like that film…their precious rules them all!

Another thing that I’d like to mention here is also how difficult is is still to train your hoomins even after all this time so you can make them to understand what you are trying to tell them in our very subtle way....like for example when you want to make your hoomin  move from your sofa because there is not enough space to stretch your tired and weary paws! It’s not after all the biggest sofa and a cat and a hoomin can’t really fit in a two seater sofa especially when the cat mentioned needs his own private space that is so he can stretch a bit. Nope, my hoomin doesn’t seem to be understanding that I want her to move from my sofa even when I keep pushing her with my paws and claws, very gently of course, so she can move.....she just keeps ignoring me which of course won’t do....after all it is my sofa and I need from time to time to be left alone to stretch there all by meowself....after all she can always sit on the floor of course if she wants to!

Yes sometimes it can be really frustrating trying to make hoomins understand what you want them to do like for example when you want them to share their food on their plate with you....I’d usually just sit next to my hoomin and then I’d have to use my paw to get my own portion from the plate otherwise she won’t give me any of her chicken or fish....she would eat it without sharing with meowself or Tolkien (OK she doesn’t really have to share with Tolkien if she doesn’t really want to!

Hoomins can be such a hard work some times but there is not much that you can do really other than keep trying to train them the right way! At least they are at home now so you can spend enough time to teach them what they really need to learn so they can share our home with us!

Anymeows better go now as it is time to entertain Tolkien now that hoomins have gone to bed. 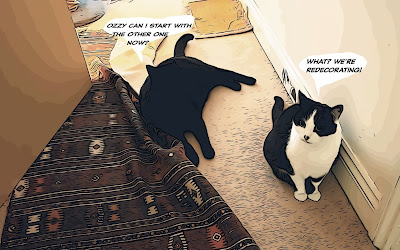