Yeepee! No hoomins outside again…and the birdies are all back!

So here we are again, a brand  new week has just started and a very nice week it is being promised to be...Well and as I was saying last week I’ve heard my hoomins talking about all the other hoomins becoming indoors only once again. You know like it was back in the spring because things are not going very well again. Something which I believe it is a very good thing for both hoomins and cats as well as for all the other creatures outside of course. You see I strongly believe that it would do a lot of good to hoomins to be indoors now that the weather is changing again and it gets rather cold outside. Who wants to be outside when it is cold, windy and rainy? Not any hoomin that I can think of or cat for that matter of course! Besides it is a lot safer to be inside these days especially when hoomins can do their work from home where they can have the best assistance they can ask for, us, cats of course. Everybody knows by now that we are and have always been a great help to all our hoomins. My hoomins think so anymeows....although I must admit sometimes it can be a bit adventurous when you are trying to assist your hoomins when they are doing exercising as they don’t always pay as much attention as they should and accidents can happen....which accident by the way it was not my fault in anyway....the hoomin should have paid more attention and she should have been aware of meowself standing behind her so she should have avoided falling on the ground...unexpectedly....it was the hoomin’s fault entirely!

Anymeows back to what I was saying earlier about all the other hoomins that they are staying indoors now and how good this is not only for them but also for the other small and bigger creatures outside as they can now have the entire outside world to themselves again. Which also means of course that a lot more birdies are coming again to the feeder so meowself and Tolkien can observe them without being disturbed by passing hoomins (by the way you can still read about our life at home and of course all about the good times we’ve used to have at home in the good old days before March when hoomins behaved like hoomins and they’ve used to go outside often...in the hoomins comic Life with Ozzy.. and Tolkien available on Amazon).

Of course there is still that pesky squirrel who is keep coming to steal the birdies food from the feeder and who now has become totally unafraid of meowself and Tolkien despite all our attempts to scare him away as well as of my hoomin when he is trying to get his attention by knocking on the glass....nope that squirrel is not paying any attention at all or showing any signs of fear. I think that any day now he would knock at the front door and ask from my hoomins to let him into the house because it is getting too cold to be outside....the nerve of that pesky squirrel!

Oh well he can be annoying at times I guess but and at the same time it is also quite entertaining to watch Tolkien scratching at the window and trying to get to him....poor Tolkien.

By the way and despite what hoomins are saying I would like to once again try and clear my good name and to assure you that despite what my hoomins might say about meowself I’m not a bully and I’m not really bullying Tolkien when we are playing....we are only having a bit of fun and as I’ve said it before Tolkien can be such a drama queen sometimes and he likes making a lot of noise and acting like I’m trying to kill him or something....He is only faking it so hoomins wouldn’t be surprised when after his little performance they then find him asleep on the bed having forgotten all about the last attempt to his life by meowself....yeap he is only pretending....

Besides I’m not a violent cat and even when I occasionally might nibble on the hoomin’s nose and cheek is only out of affection, my own special way to show to my hoomin how much I care....I don’t really bite....I’m just being a little playful and affectionate to my hoomins!

Anymeows better stop now as it is getting late and I can hear Tolkien calling me as it is time for our late play session which I can assure you it would be as always very innocent and no biting or fur pulling would be really taking place.... 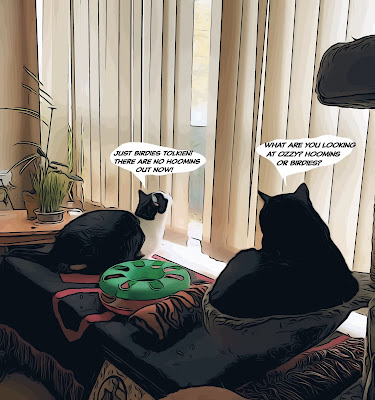 Yeap that pesky squirrel is totally ignoring me again! Well OK, maybe I’m exaggerating a little here as things perhaps are not as dramatic i... 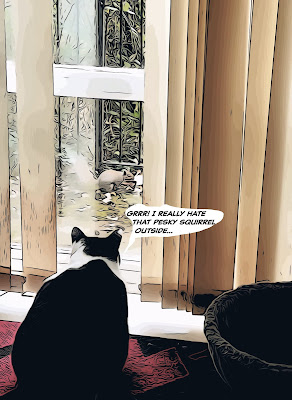