Well OK, maybe I’m exaggerating a little here as things perhaps are not as dramatic in reality but that annoying squirrel outside has been nothing else but a real nuisance with his continuous visits to the bird feeder. He is sooo annoying! I mean he’s been coming for months now and he is stealing all the food from the bird feeder on the window and he’s totally ignoring all our efforts to make him stop visiting and to try to scare him away. He appears to be not afraid of anything and anybody....meowself included, Tolkien and even the hoomin! We have tried everything we could (other than stop putting food in that feeder  which of course it wouldn’t be fair to all those poor hungry birdies outside who they like and need their food now that is getting cold and it’s harder for them to find any food out there). From Tolkien climbing, scratching frantically, meowing at him and even jumping on the window (and knocking over all the hoomins’ plant on the window sill in the process) to even meowself starring at him menacing (yes I can be menacing if I want to and I can look like a ferocious cat if I decide to be one....hoomins would tell you how scary and mean I can be....I tend to bite the hoomin’s nose and fingers when I get annoyed and growl at the other one....but I do admit though that I don’t really like been mean and I can’t really be aggressive to my hoomins because I like my hoomins not because I can’t be one of course to be clear....as for Tolkien, well... he is too stupid to even release that I’m being mean to him anymeows...by the way you can still read about our life at home and of course all about the good times we’ve used to have at home in the good old days before March when hoomins behaved like hoomins and they’ve used to go outside often...in the hoomins comic Life with Ozzy.. and Tolkien available on Amazon). Even hoomin’s attempts to scare him don’t seem to work at all and when my hoomin knocks at the window that pesky squirrel just ignores him and he even looks rather annoyed for being disturbed while he is eating....the nerve of that squirrel I’m telling you...

So and after all this time we have now got used to see him on almost daily basis coming and eating without showing any signs of fear or care really. My hoomins keep saying that he is rather cute really (which is an opinion that I don’t share meowself as I’ve found him rather annoying instead) and since there is no real harm in him eating the bird food there is no real reason to try and stop him. So it seems that now he is allowed to do what he wants….which again I don’t agree with as I believe that he is not only coming to steal food but he also to try and annoy us on purpose!

But I guess that if it was just  him that we had to deal with things wouldn’t be so bad. But unfortunately now it seems that things are getting even worse as he’d started to bring along his family members as well. So this morning we’ve noticed that there were two squirrels outside, our old enemy of course along with a new younger one who it seems was also trying to get into the feeder. Of course being quite young and stupid (he kinda remind me of somebody else that lives here....and he is rather long and stupid too) he couldn’t really figure out how to get to the feeder like the other one does. So and after a few failed attempts he then decided that it would be a good idea if he instead started collecting some stones from under the window where the feeder is and then bury them… I mean how stupid that squirrel was...there was plenty of food under the feeder to collect if he really and desperately wanted something to bury...He kept doing it for a while and meowself, the hoomins and even Tolkien were ended up watching him and hoping that in the end he’d eventually realised that he was just burying stones and not nuts....in vain!

Well I guess there are out there stupid squirrels too and not just stupid Tolkien....I really hope that no other members of that squirrel family make any appearance any time soon so to try and steal the birdies food from the feeder because I’m not so sure that I can cope with that constant noise and distraction outside....or that we can afford to have any more of our stones being buried! Besides they tend to scare the birdies too.

Now and talking about that stupid Tolkien.....well that overgrown kitten he is such a drama queen that he makes it almost impossible to play with him any more as he always causes so much trouble! You see he has now got this bad habit of making stupid kitten like noises, not even proper meows really more like pathetic cries every time we play chase and fight so he sounds like he is been seriously attacked by meowself and that I’m hurting him. He does that even when I’m not even playing with him and I’m not close enough to even touch him! Something of course that now even the hoomins have figured out that he is doing it on purpose  and which of course has started to annoy them as and when they come to his rescue they can then see that he is not in any harm anymeows… So we can’t really play anymore as the hoomins now tend to interfere and try to stop us so Tolkien can’t do his ‘crying baby’ routine....he is such a crying kitten really that he spoils all the fun a cat can have!

He should have known by now that kitten meowing is only meant for the hoomins as they can’t resist it and they would then give in to all of our demands a lot quicker....and not for playing with meowself.....Oh well at least he is not burying food and biscuits under the carpet....well at least not yet.

Anymeows better go now as Tolkien is finally awake and hoomins have already gone to bed so maybe and hopefully we can then have a little play time without any interferences....I doubt it of course as he is after all Tolkien! 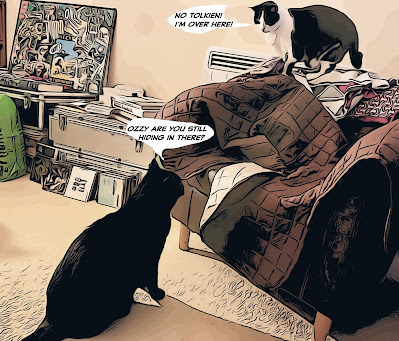