Life with Ozzy and Tolkien...don’t think so hoomin!

Well and if you remember from last week when I was telling you how much caring, considerate and helpful around the house I’ve always been and therefore I thought that it was only fair for my poor meowself to win, you know, one of these awards that hoomins so easily give to each other and sometimes they even feel generous to give one to their animal pals as well....you know intelligent cats like meowself (I’m referring here to dogs of course as they are not that clever to deserve any award of course...I mean you only have to tell them to fetch and they get so excited and then they’d go after anything...especially sticks...what is it with those sticks, any way….so yes not very intelligent behaviour at all, in meow opinion of course).
But of course and as you can tell from my general and as always very calm attitude I didn’t win anything because of course I was not even nominated for anything....all the awards were won...surprise surprise here, by hoomins of course and I didn’t even win the award for best cat of the year....pfft, not fair!
But naturally it wasn’t really my fault that no award arrived at my home (even not one little one for being so considerate for living with them hoomins and Tolkien...) but who else’s of course other than my hoomins who once again couldn’t be asked to at least nominate meowself for something....it’s like they believe that I’m not even worthy of an itchy tiny award, you know just to say thank you for all my efforts all these years, looking after them every single day of the year...along with looking after Tolkien of course...who is, you can say, at least a bit difficult to handle....most of the times!
But and as you well know I’m not a cat that likes to blame others for their obvious mistakes which mistakes they make all the time…I’m very forgiving (not forgetful of course) and I would not keep mentioning things that they had now passed and happened such a while ago....there is no need of course to dwell in the past..
So once again I have forgiven my hoomins for their mistakes and besides sometimes there is nothing else that you can do after all...hoomins are hoomins and they do make a lot of mistakes after all!

But and while I’m willing to forget the past and carry on with normal everyday life hoomins on the other hand tend to have other plans which plans I don’t really like at all. You know of course that they have become this year obsessed with healthy living and doing things that they are good for the environment and all these crazy things that hoomins often do but now this bizarre behaviour has got worse as they are keep talking non stop about downsizing and living a simple life needing not many things and also even they are now considering moving to another country where the weather is better apparently....I’m not sure what that really means but it can’t be that good if they want to move...and besides I don’t want to move or to downsize anything....I have all the things I need no less is needed....I could always do with a bit more of course since Tolkien takes all my toys and best sleeping areas so and most definitely I’m not willing to downsize on anything...us cats don’t do simple life hoomins do and that’s is that and I’m not going to change my mind on the matter…
But this downsizing business is not really the worst as hoomins as everybody knows they tend to say that they’d do things and very soon after they’d change their mind….so all this talking about simple life I’m pretty sure that sooner than later will pass….So yes this is most definitely not the worst idea the hoomins so far they had as the worst to come is this new crazy idea hoomin is now having about writing a book about meowself and Tolkien...and believe me when I say that I wouldn’t mind so much if she was just writing a book about meowself of course as I could well do with a nice biography for the world to read about my life with hoomins and Tolkien so more people then they can read and appreciate  all the sacrifices a cat like meowself and hard work of course has to put on a daily basis....No, no apparently it’s not going to be a normal book but instead she is creating a comic book where not only Tolkien and meowself look ridiculous like cartoons (we are not Tom and Jerry you know) but also and as she is making it to be a funny comic (nothing like those ones with superheroes it seems) we’d appear to be some silly rather funny characters.....How insulting! I would not tolerate been turned to a comic character and have people reading about and as she calls it my...misadventures when we are apparently rather bad and treat hoomins like they are all our slaves….such a ridiculous idea….really!
I do refuse to get blamed  for things that I have not done and which are clearly Tolkien’s work....or accused of being a spoiled fat cat….nope not meowself! I must work my hardest to change hoomin’s mind on this I think….I have a reputation which I need to keep untarnished you know!
Anymeows better go now, it’s getting really late and I feel a bit weak after all this writing business....time to visit some food bowls.
Purrs and meows till next time!
Before I go though I would like to mention once again that if you feel generous and you want to help some of our senior cats with their vet bills so they can have a good old age you can do so by donating: So please click here:
!!!NEW!!! If you want to have a portrait made of your furry companion check this site for more details at: Dog Art:
Also you can buy some of my own range of products, the Ozzy Superstar range here too:


Don't forget to check my hoomin's site on Cat Behaviour if you want some advice...hoomin says that I am really good at giving good advice to hoomins! 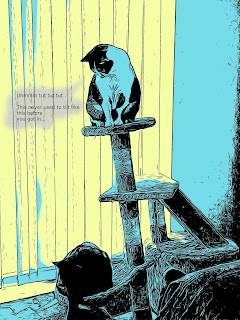