Living in a hoomin home sometimes can be a bit too much!

You know and without wanting to sound rather arrogant as I’m a cat that always tells the truth and of course I am also very honest and therefore I can’t be really accused of being arrogant, selfish or even dishonest for that matter in anyway. But of course here I’m talking about cats honesty and not hoomins of course (as you all know too well that hoomins tell a lot of lies all the time and they are not to be trusted) I am a very kind and intelligent cat, a lot more than my hoomins of course and this has been established a long time ago....from the very beginning with our relationship with hoomins.
But of course because I’m very intelligent this doesn’t also mean that all cats and kittens of this world are as clever or close to be clever as me....especially Tolkien. This is of course something that we had established at the very beginning when we found out about Tolkien’s peculiar ways. Well at first and since I’m very understanding cat I thought that all his peculiarities were because of his young age, you know being a kitten and not having much experience or even knowledge of basic things....but and as of course you already know things got worse as he got older....he developed a lot more of peculiar habits and behaviours that they are well very very strange and in someways someone might even say stupid....as they seem to get him in a lot of trouble most of times without me doing anything that could make things worse of course!
I mean some of his playing habits...it is of course normal for a cat to chase a ball or even a feather, string and even my favourite one, peas on the floor but Tolkien has taken the playing thing too far these days...I mean the things that he finds interesting at times and wants to play with....well I simply can’t understand him!

So and for the past few days he has found a new game…he seems to like playing in the shower room rolling around and playing with something that doesn't seem to have a name and which he took out from the plughole and he would not let go despite all hoomins efforts....he spends a lot of time inside the shower trying to clean it by rolling around and playing with that things (which I sincerely hope it’s not a new form of life that came out from the sewers or something…) or leave the shower for the hoomins to use it.....Then his weirdness would get worse as he would also follow the robot cleaner around and then he would pretend that he is one as well and he would start rolling on the kitchen floor copying the robot cleaner and trying to clean the floor as well!
You know sometimes I wonder why the hoomins are using that small robot cleaner (which in my opinion is a lot better that the other bigger and noisier thing that hoomins often use to clean the whole house) instead of using Tolkien in its place....well there are a lot of similarities between them after all as he is the same colour of course, black and he is very soft so he would most definitely pick up a lot of dirt especially the way he likes rolling over on the floors....you know it’s an idea that the hoomins might want to take on....and it is a cheaper solution and Tolkien then serves at least some purpose after all!
Now and since we are talking about hoomins and their gadgets I have but to mention this peculiar obsession they have with gadgets especially those ones that tend to turn on and off automatically....I mean it is so confusing! One minute it’s dark in the house and then all the sudden and out of nowhere lights are being turned on, heaters are coming to life, music plays from the hoomin’s special room (which she doesn’t let us get in there anymore because apparently we are very destructive....pfft nonsense I say!) and the house feels like it is been haunted....Can then anybody tell me what is this hoomin obsession with all these gadgets which apparently listen to another hoomin’s voice called Alexa or Siri or something similar....so peculiar I can tell you....It is a bit strange when things come on alive when hoomins are not around which at times I must also admit that they are quite useful especially when it is dark at home but at least they should come with some kind of warning and not all of the sudden....it can be unnerving at times you know!
Any meows better go now and check if that strange hoomin’s voice has somehow managed to fill up my bowl again....of course that would be an excellent trick if Alexa can do that....then who needs the hoomins, ha!
Purrs and meows till next time then!
Before I go though I would like to mention once again that if you feel generous and you want to help some of our senior cats with their vet bills so they can have a good old age you can do so by donating: So please click here:
!!!NEW!!! If you want to have a portrait made of your furry companion check this site for more details at: Dog Art:
Also you can buy some of my own range of products, the Ozzy Superstar range here too:


Don't forget to check my hoomin's site on Cat Behaviour if you want some advice...hoomin says that I am really good at giving good advice to hoomins! 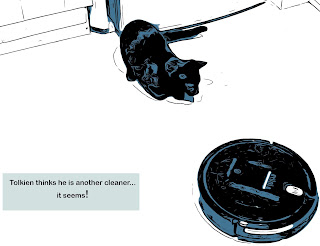