Kittens can pick up bad habits very easily (and it is hoomins fault!)


Let me make one thing clear I have nothing against kittens (and especially Tolkien), they are our future after all (and I mean us, cats, of course) and we need to take care of them and teach them the right ways of the cat life of course!
But naturally there are the occasions where kitten training can go very wrong, especially when there are hoomins involved, you know when they do get interfere and they try to teach kittens how to become cats....like they know themselves how to be a cat....of course they don’t know anything, they haven’t the slightest idea!
So for the past few weeks and since Tolkien has arrived I have been trying my hardest to teach him how to be a proper cat and I know of course that he is still very young and gets easily distracted and influenced by those hoomins but still there are times when it seems almost impossible to teach him to do anything… right! How on earth he is ever going to learn to be a proper cat when everything he learns is wrong and everything he does is always the opposite of what I’m trying to teach him? Sometimes I think that he is such a loss cause and that I should give up and leave the hoomins to take over completely, which of course it would be a total disaster....hoomins teaching a kitten how to be a cat, unheard of! What a preposterous idea! An utterly disaster!
The main problem with Tolkien is that he doesn’t listen or pay attention to what you are telling him...I mean he is not supposed of course to listen what the hoomins are telling him but he needs to learn nevertheless to listen to what I’m telling him....not to totally ignoring me and to think that everything is a game and it is OK for him to play with everything....including my precious tail, which is not a game of course! Tolkien you are not supposed to play with MY TAIL all the time....cats tails are not a toy like hoomins hands and feet where you can scratch, lick and bite them whenever you feel like...I mean he has now developed this big obsession with my tail which it doesn’t really make sense...he would always be there behind me playing with my tail...You know and like most cats I do love my tail and I do take good care of it and I don’t leave it on purpose in front of the hoomins feet to trip them over or I would try to trick them so they can fall over in their attempt to avoid stepping on it....because I really really like my tail...Now Tolkien doesn’t think a lot of his...always leaving in front of hoomins’ feet when they are not looking  and he doesn’t even like playing with it...well it is a bit long for his size but still he should take better care of it instead of being always preoccupied with mine...the many times I have told him to leave it alone and he has ignored me....frustrating to say at least, he doesn’t listen to reason or to my paws whacking at him!

Then there is the other very bad habit that he has also developed…the stealing of my favourite snoozing spots...especially my little hammock by the window....by the way do not pay any attention  to what the hoomins are saying....I have not abandoned the hammock because it is too small for me or that I don’t really fit in there anymore...all nonsense, hoomin propaganda and lies! I’m not fat and it has always been my favourite place, no matter what hoomins might be saying...It’s not true that Tolkien started using it because I had abandoned it and that when I saw him using it then I’ve decided once again that I wanted to use it for snoozing as well....of course not, I didn’t get jealous or anything of that sort! Tolkien simply took over, moved there without my permission....he’s now stolen my favourite snoozing spot and he simply refuses to give it back and hoomins, to make things worse, are taking his side because they believe that apparently I’m too big to sleep there anymore, pfft! So absurd...it is my hammock and I want it back and I do fit as purrfectly as I’ve used to....besides the whole scratching platform it’s mine and I don’t feel like sharing it with anybody, especially Tolkien since he likes stealing my favourite places and then refuses to move when he’s asked to do so nicely.....Such bad habits....he should learn not only to listen to me but also to show some respect....stealing is bad Tolkien, this isn’t something that cats do….well, most of the times anyway!
You won’t see me stealing stuff from hoomins or Tolkien (after all most of his stuff are used to be mine anyway....I’m simply letting him have them because I feel sorry for him!).
Anymeows better go now....time to check some food bowls...especially Tolkien’s, it’s probably still quite full....by the way this is not stealing....it is just making sure that food is not get wasted....


Purrs and meows till next time!
Before I go though I would like to mention once again that my hoomins are trying to raise money to help older cats such like Choo Choo and Faith were with vet bills as their treatments can be very expensive since insurances don’t cover senior cats treatment for life (not fair really as we can live a lot longer now and some of us need medical treatment)...so if you feel generous and you want to help cats like Choo Choo to have a good old age you can donate by clicking here:
Also you can buy some of my own range of products, the Ozzy Superstar range here too: 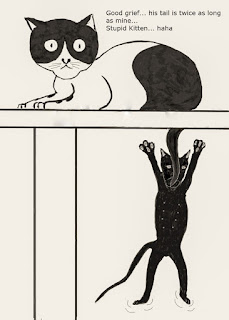