So many accusations….but not that much evidence to be accused though!

Here we are again, another week has just passed and things have not changed that much, well at least for meowself that is.

By the way the whole thing or at least some of this anymeows it is because of the bad, cold weather we are currently having. You see if it was still nice and warm I would not of course need a blanket to keep meowself and paws warm and Tolkien would have been quite happy still sleeping on his favourite spot on the scratching post and not trying to steal my blanket and getting me to all sorts of trouble with the hoomins!

Yes it is true I do like my blanket and I don’t like sharing it with either Tolkien or the hoomins (besides the hoomins have other blankets or ponchos or whatever they want to call them and Tolkien has enough fur to keep him warm without needing my blanket). So I won’t let either of them have it and that’s final no matter how hard they might try…

Now and to explain something else as well I’m not a thief or opportunist either! I don’t steal the hoomins’ or Tolkien favourite spots on the sofa or the chairs I’m just occupying spaces when they become available….

If the hoomin is not sitting there then it is free to use…even if the hoomin is always sitting there and it’s her favourite spot. I must admit it is a nice, warm, comfy spot to sit and snooze but I do not try to steal it from her. I simply occupy it when she is not around and keep it warm for her and I don’t wait for her to move so I can sit there hopping that when she is back she would feel sorry for meowself and she won’t move me. So no I’m not stealing the hoomins sitting spots I’m only using what is available…unoccupied spaces, like Tolkien does (By the way you can still read about meowself and Tolkien’s life at home and of course all about the good times we’ve used to have at home in the good old days before March 2020 arrived when hoomins behaved like hoomins and they’ve used to go outside often...in the hoomins comic Life with Ozzy.. and Tolkien available on Amazon).

Now another thing that I really want to clear is this recent accusation of meowself starting stealing food from the hoomins’ plate. This is definitely not true, it was just an unfortunate accident which simply made me look bad because I was there, that’s all! You see my hoomin’s toast slices with that cheese spread looked and smelled so good so I had to have a closer look and it just happened that my paw touched one of the slices accidentally on the side and that slice simply slid and ended up on the floor. It was just an unfortunate accident…Of course and since the hoomin wasn’t going to eat the slice from the floor (besides she had enough toast slices on her plate already) I’ve decided to help and eat that slice or at least the cheese on the slice so it didn’t get wasted!  You see I was only trying to help here. I didn’t do anything wrong, it was just an accident, the toast slice was meant to fell on the floor and I was just there when it happened. You know been at the wrong place…perhaps in this occasion and for the toast at the right time…that’s all.

So no, I don’t like being accused for something I didn’t actually do or being called now little thief and the hoomins saying that they have from now on to keep an eye on meowself while they’re eating because I might steal some of their food. No I don’t like it at all….besides some of the hoomin food is not that nice after all, especially some of the green stuff they eat which they call vegetables….yuk!

Besides Tolkien is also always around when they are eating as well and he also likes some of the hoomins’ food, some of which doesn’t even taste nice like marmite….yuk! Yes he is strange big kitten still!

Finally I would also like to say that I don’t sing at night time when I’m on my own or playing on my own….I don’t know what the hoomins think they can hear but it’s most definitely not meowself trying to meow/sing or playing in the living room on my own…they’re just imagining things…or they can hear Tolkien instead (and he is not sleeping on the bed as they think).

Anymeows better stop now it is getting late and dinner appears to be late again….oh those hoomins of mine! 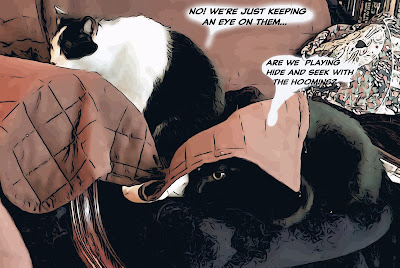 Ozzy and Tolkien would like to ask you to donate if you could so to help us with the ever expensive vet bills of our senior cats so they can have a good old age.  So please Paypal Ozzy and Tolkien’s hoomin. Thank you!

Finally this year is over….so let’s all hoomins and cats have a great New Year!

You can read Ozzy’s comic  ‘Life with Ozzy and.. Tolkien’  which is available to download or buy on Amazon Well finally the last day of a...