Hoomins are becoming more like cats....or is it the other way around?

You know and as I have mentioned it many times before I meowself purrsonally I like having my hoomins at home all the time as there are more benefits in having your purrsonal servants at your disposal anytime you need them....What is the purpose of having hoomins after all when they are not around most of the day when you need them to keep food bowls full and entertain you after you had your daily naps and play with Tolkien?

So yes I’m glad that my hoomins are at home with meowself and Tolkien but there are unfortunately times when I tend to get annoyed with those other hoomins who they think that they know everything about cats and their relationship with their hoomins especially when they are getting things soo wrong and then they start accusing all cats and hoomins for things that we are not really responsible for or when they are talking and even writing about things that they are quite clear just lies and misinformation.

You see recently I’ve read an article about how hoomins seem to becoming more like their cats now that they are staying at home which it really upset me as it was quite clearly just fake mews!

After all and despite some hoomins might believe all cats have interesting lives and they don’t really need to go outside to go hunting and socialise with whoever...we don’t socialise with whoever only with our hoomins at home....and meowself and Tolkien don’t like hunting either unless we hunt of course running balls and toys stuffed with catnip....I like watching the birdies outside and I don’t want to hunt them....

So all these similarities that the writer mentioned that indoor hoomins have now with their cats are not real or make the hoomins be more like cats....I think actually that it is quite the opposite...we, cats are becoming more and more like our hoomins and we like it! So there…(By the way you can still read about our life at home and of course all about the good times we’ve used to have at home in the good old days before March when hoomins behaved like hoomins and they’ve used to go outside often...in the hoomins comic Life with Ozzy.. and Tolkien available on Amazon).

I can’t see any hoomins around with paws but my hoomins seem to have hands which they do wash more often than they’ve used to for their own reason I guess but and at the same time meowself and Tolkien we also don’t spend too much time cleaning our claws as our hoomins they frequently give us pawdicures...besides our paws and claws are always clean!

Also and to make it clear our hoomins have most definitely not become more territorial over things....on the contrary they like sharing things with us....their bed, sofa and chairs and even their food....This is one of the reasons that I like my hoomins because they do like to share their things with us!

I do admit though that they do like watching the birdies outside like we do and especially those pesky squirrels which meowself and Tolkien find as you probably know rather annoying...which of course it it a good and very entertaining thing to do whether you are a cat or hoomin.

Also my hoomins do not nap during the day like we do sometimes but they do instead like sleeping quite a lot and they don’t get up early in the morning like they’ve used to as they go to bed now really really late...which it is again a good thing as we can then all go to bed at the same time!

Also they are not really obsessed with food as such but they do like doing a lot of cooking and baking which is a good thing as the house always smells now very nice and there is always good food to share...

I must admit though that they have become a little obsessed with cardboard box deliveries as we seem to get a lot of them these days and we now have towers of boxes to play which it is of course a good thing considering that Tolkien has a special appetite for cardboard and he goes through a lot of them in a week...

A for doing exercising and yoga...well not so much anymore as my hoomins have long passed that phase and now they seem to prefer instead spending a lot of their time sitting and watching TV which of course is one of my favourite pastime too...There is nothing better than stretching your paws on the sofa while watching your favourite nature programme or cartoon show...

As for running in the house....well my hoomins don’t run inside or outside the house...they seem to even find it difficult walking from one room to the next and they don’t seem to like it when meowself and Tolkien do our daily exercises as they keep saying that we are making a lot of mess and leave too much fur on the carpet (they don’t even vacuum the carpets themselves anymore as that robot vacuum seems to be doing all the work....my hoomins are so lazy!).

Of course my hoomins like meowself and Tolkien don’t like it when outside people ringing the door bell and they do get startled as it can be really loud and some people like pressing the darn doorbell just for fun but then again....there are all these almost daily deliveries which they need to be delivered.

And of course I totally dispute the fact that my hoomins are not looking after themselves anymore even if they are not going outside to be pampered as they’ve used to....they do seem to manage themselves quite well as well as they are pampering ourselves I’d say.

So there, see our hoomins are not becoming like us, quite the opposite they have only adopted our good behaviours and we have adopted theirs so everybody can live with each other happily at home...So don’t read and believe all these recent fake mews…we cats behave like cats and hoomins like hoomins…we have all simply adapted to the new changes in our lives indoors. 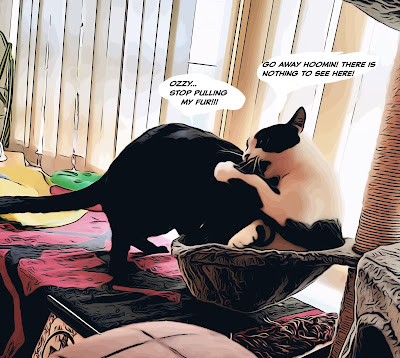