Well everything is back to normal again and it’s rather boring...

So here we are once again and the new year has officially started and all the celebrations and most of the hoomins silly resolutions (thank God) have already been forgotten. Yeap normality has hit us once again and all the decorations have been put away by the hoomins and the house looks…pfft very normal again and....boring. I must admit I did like it with all the Christmas decorations and of course watching all of Tolkien’s regular attempts (most of them failed ones of course) to get rid of hoomins decorations a bit too soon than they were meant to be put away....Ahh yes I do miss those lovely weeks with all that extra food so easily obtainable and the hoomins rather unusual but welcoming for once good mood...Yeap all the good festive cheer!

But of course all the good things have to come to an end especially when it comes to a year like the last year which things didn’t really go according to plan for most of the hoomins who they had to spend a lot of their time at home and of course with us too...something that some cats like meowself and Tolkien appreciated a lot while others…not so much as hoomins can be sometimes overbearing and annoying of course (By the way you can still read about our life at home and of course all about the good times we’ve used to have at home in the good old days before March when hoomins behaved like hoomins and they’ve used to go outside often...in the hoomins comic Life with Ozzy.. and Tolkien available on Amazon)!

But now reality has finally hit and everything looks again rather boring and a bit depressing....not for us of course but mostly for the hoomins who have to spend once again a lot of months indoors without being able to go out at least occasionally for what they call socialising...not sure what it means really but it is something that hoomins well at least my hoomins like to do occasionally and which now they seem to be missing. Yes things don’t look good out there for the hoomins it seems as they have to spend all their time indoors once again....at least they can go out for shopping otherwise things would have been really bad if they couldn’t get our food and biscuits regularly....it would have been a national disaster I say....the end of the world as we know it and I’m not exaggerating...we’d have starved to death!

But I do think that hoomins are overacting of course as life indoors is not that bad really as we all know rather well. You know meowself and Tolkien are staying indoors all the time and we don’t mind it we don’t get depressed as there are always things that any cat or hoomin for that matter can do to entertain themselves really....For example there are always birdies and even squirrels outside to watch. Especially stoopid squirrels like the one that he is often visiting and tries to steal the birdies food and who it seems hasn’t really realised yet that there is no bird feeder on the window anymore. So he keeps climbing all the way to the top and then stares in disbelief when he can’t see the bird feeder where it used to be....stoopid squirrel.

We also had a little of bit of that white stuff the other day outside as well....what the hoomins call snow and which looks rather soft and it appears to be cold as well....Tolkien wasn’t very impressed really but it did bring a lot more birdies to the new feeder outside.

So yes there are things to keep one’s self occupied and entertained when at home and especially now that is rather cold outside and I think that hoomins they should be grateful that they can stay indoors in the warm and they don’t have to go outside anymore (instead of watching the news on TV all the time and getting more annoyed it seems as there are no good news it appears)….

Besides it’s not only the birdies and squirrels outside that they can be entertaining as Tolkien can be too especially when he tends to freak out himself for no real reason and then he acts like he is being attacked…by his own shadow....He is such a scary cat really....meowing and scaring out the hoomins for no apparent reason....he just fell off the table in the dark...no big deal it happened to all of us…such a crying kitten really.

Anymeows better go now things to do and hoomins to try and cheer up. 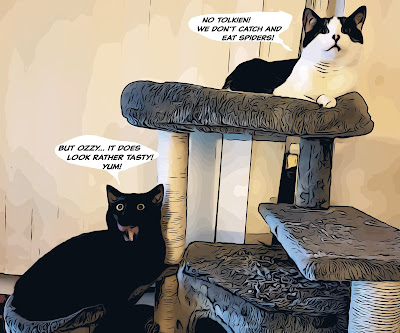