This is not really the new year I was expecting...so far!

So finally we said our goodbyes to the 2020 and the new year at last has arrived but things don’t seem to be going as well as we’d have expected them to be....

But I don’t think that this new year has started as well as everybody was expecting. Of course hoomins being hoomins went through their usual new year routine as they normally do at the start of every year of promising themselves that they would change their ways and abandon all their bad habits and start eating healthy and do more exercising and trying to get fit and thin, etc, etc…Promises which we of course know by now rather too well I might say that the hoomins won’t stick to for more than a couple of weeks before they get bored and frustrated and then they revert back to the old and familiar routines.

Yeap it is the same old routine every start of the new year of failed attempts of hoomins to change their lifestyles. This is why meowself and Tolkien and after learning from the hoomins decided that is better that we stick to our own resolution for the new year of not to try to change anything and stay the same way as we’d always been... not to attempt to improve anything that it doesn’t need improvement. After all why we should try and change things when everything is absolutely purrfect. We are besides the purrfect examples of modern cats living the good life. We have the hoomins we need and everything else that a cat would require. So there is no need for all these nonsense of healthy living, exercising and attempting to lose weight as us cats after all don’t get fat (OK maybe Tolkien is a little too big for a cat but I guess this isn’t something that he can really change....can he? By the way you can still read about our life at home and of course all about the good times we’ve used to have at home in the good old days before March when hoomins behaved like hoomins and they’ve used to go outside often...in the hoomins comic Life with Ozzy.. and Tolkien available on Amazon).

So yes our resolution for this new year is to try and keep things the way they are....the hoomins at home and those pesky squirrels away from our window. Something which might not be that far fetched after all as the fat pesky one broke the bird feeder the other day when he just jumped on it....he is far too big and the poor feeder couldn’t take his weight so now the poor birds have no feeder. But of course it got funnier when the other squirrel (the younger and rather stupid one) tried to jump on the feeder without realising that there was no feeder anymore and ended plummeting into the ground....he he, stoopid squirrel. After that fiasco and all that big noise and mess that that squirrel made the hoomins decided that they won’t replace that feeder or try to fix it after all but instead they’d add a different feeder on the tree opposite, away from the window so the squirrels can’t tease us anymore. Finally I say!

Well I would say that this was a good start to the year for meowself and Tolkien. Not so much for our hoomins though as they seem to have some issues at the moment with what they call the internet (no internet at the moment and whatever that is) and they are not very happy as they have to wait to have it fixed. And of course now all the rest of the hoomins have to stay at home all the time as well as they did last year which means they are not having a very good start to the new year either (the birdies on the other hand seem to have an excellent start to this new year though). Oh well perhaps they can at least try to stick to their resolutions of keeping fit and healthy this time as they wouldn’t have much else to do. Nah..kinda of think of it…it’s not going to happen really, they would probably get back to their old ways again…a lot quicker perhaps this time.

Well the start of this new year might have not been so great so far for the hoomins but at least they are staying at home again which means that meowself and Tolkien can stick to our own resolution of having things staying the way they were.

Anymeows Happy New Year to all hoomins and cats out there 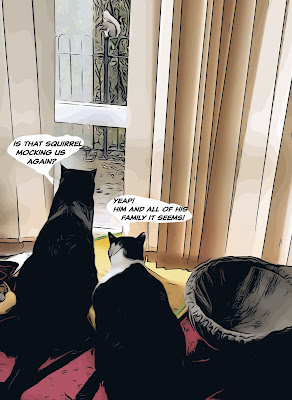 The disappointing side of hoomins…these times!

You know that the moment I move from here that pesky Tolkien would steal my seat again...pfft! You know I’ve been living for a very long tim... 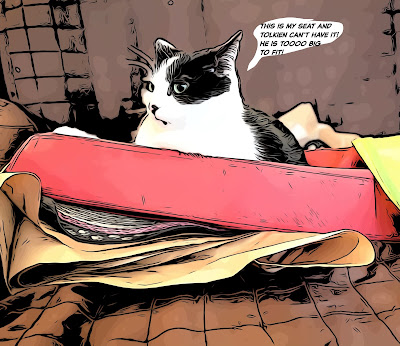