Finally the hoomins seem to appreciate the benefits of being at home...

Yeap it took them a while but finally my hoomins seem to have realised that being indoors all the time is a good thing after all especially now that the weather is really cold and we had quite a lot of that white stuff outside which they call snow!

Of course there are many benefits in being indoors all the time where hoomins and cats can stay safe and warm as we cats know too well but for my hoomins there have been always some cases of doubt when at times they’ve seemed to be wishing to be able to go outside frequently as they’ve used to do!

Well the recent change of weather seems to have finally convinced them otherwise...You see the last few days we had quite a lot of that snow stuff which apparently can be not only really cold (I can’t tell for certain of course as at home is always warm and cosy) but it can be also slippery and dangerous as well especially after a day or two when it freezes and it’s not that soft anymore! Something that my hoomins clearly don’t seem to like as their recent outdoors adventure appeared to indicate....Of course my hoomins occasionally they have to go outside to do some of that important stuff such as shopping something which of course I do approve as we need after all to have our cat food cupboard always full so there are no shortages to our food supply and any danger of us starving of course. So when the hoomins went outside recently weren’t pleased at all with the conditions outside as and when they came back they were kept complaining about how cold it was, how icy the roads were and how they didn’t like going outside when the weather was that bad… See? My hoomins finally realised that being indoors is a lot safer and more preferable....They finally seem to have come to their senses. Outdoors is not nice or safe to be for cats and hoomins!

Of course and to be honest I also think that the hoomins might be exaggerating a little bit as well as they often tend to do so and I don’t totally believe that things are really that bad outside....The snow after all looks really pretty on the trees and plants especially when it is freshly settled. Even Tolkien thinks so too and he is even convinced that it probably tastes quite good as well (I wish hoomins would brought some snow inside for him to try so he can have his tongue frozen....that would have been really fun to watch. By the way you can still read about our life at home and of course all about the good times we’ve used to have at home in the good old days before March when hoomins behaved like hoomins and they’ve used to go outside often...in the hoomins comic Life with Ozzy.. and Tolkien available on Amazon).

Yes Tolkien can be sometimes sooo stoopid and it is impossible to try and teach him anything at all. I know I have mentioned it many times before that he can’t really learn anything at all but you can’t stop a cat like meowself from keep trying to teach him some basic cat skills as I have to live with that big clumsy overgrown kitten. No brains up there but at least you can hope that he would at least understand some basics such as that he is not to follow the hoomins all the time around the house and to get so excited when the hoomins give him a bit of attention. He has no sense of cat dignity and how he needs to learn to ignore the hoomins at times if he wants them to do his bidding. You do not run to go to the hoomins when they are calling you....This is not what any decent cat would do…You simply ignore them so they’d come to you. You don’t beg for food. You simply show them with subtly that your food bowl is empty till they finally get the message....no dignity in that big soft fluff of a cat at all!

By the way today he was caught by the hoomins with a bit of white fur in his mouth so finally the hoomins realised that it is him who is the bully around here and not me....all that black fur on the carpets is just excess fur that it came out by Tolkien himself (he is pulling his own fur you know) without any intervention of meowself. Finally the truth is out!

Anymeows better go before that Tolkien steal my spot on the bed again... 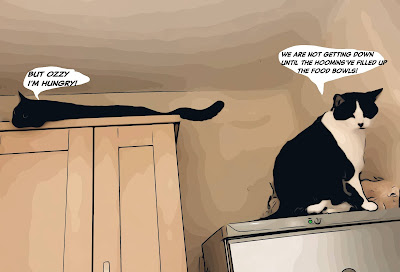