I think it’s about time for some positive thinking....for the good of the hoomins of course!

You know living with the hoomins at home all the time can most definitely have some negative effects on us, cats, especially when you are an intelligent cat like meowself as hoomins behaviour and general mood and thinking can rub on you and affect you in many ways. For starters hoomins can be rather miserable and full of negativity most of the time and they always seem to see the bad side of things even in the most positive situations....you know they always wait for the worse thing to happen...

On the other hand meowself is or at least used to be a rather positive and happy cat who enjoys life and all the good things that it can bring, you know like good food, good home, a rather relaxed life and good hoomin servants. But as us, cats tend to get easily attune to our hoomins emotions it is then almost impossible to avoid falling into that negative mood and way of thinking that hoomins seem to always be these days. Of course I do understand that the past year has been a rather difficult one for all hoomins as they had to spend a lot of their time indoors and not do the things they were used to do for such a long time now but you would thought that after all this time they’d have at least adapted and learned to make the most of the situation like we do instead of being continuously miserable and grumpy!

So yes I think that is about time that I’ve started meowself to see the positive side of things and to stop being as grumpy and miserable as currently are my hoomins. Of course it’s not going to be that easy considering that I do live with grumpy hoomins and a stupid Tolkien but at least I can try especially now that the year is coming to an end and the festive season is fast approaching (by the way you can still read about our life at home and of course all about the good times we’ve used to have at home in the good old days before March when hoomins behaved like hoomins and they’ve used to go outside often...in the hoomins comic Life with Ozzy.. and Tolkien available on Amazon).

You see I need to keep reminding meowself that life is good, I’m quite happy living with my hoomins and even Tolkien and I’ve got everything that a cat would have ever needed....

Of course things are not all that purrfect as there are still areas that they could easily do with some good adjustments and improvements such as the situation with the squirrels outside which has now become dire as there are more than one squirrel fighting over the birdies food. Yes now we have two squirrels trying to get to the feeder at the same time and a lot of bird food being scattered on the ground in the process...which it is good for the birdies at least as they do get to eat some of that food instead of the squirrels having it all to themselves. So now meowself and Tolkien spend a lot of time trying to guess which of the two squirrels would win the spot on the feeder and which one will end up on the ground....At least they are afraid of the fat and brave robin who takes no prisoners it seems!

Then it’s the little issue with the hoomins and their stubbornness when it comes to our sitting and snoozing arrangements....it is quite clear to meowself (and not to hoomins it seems) that I get to sit wherever I like to sit and feel comfortable at that time and the hoomins sit in all the other available locations....sharing the sofa for example is not to my likening as neither of the two sofas is big enough for meowself to stretch my paws and for the hoomin to sit at the same time…sorry hoomins I do not make sacrifices or compromises when it comes to my comfort and snoozing needs!

Then there is also the little misunderstanding about the hoomins obligation of having to share their food with meowself when I want to....it is my cat right after all to eat from the hoomin’s plate when I feel like as well as to lick any pots and pans that are left unattended around for meowself on the kitchen counters and sink....I don’t really understand you see all that fuss that they sometime make about it....you know when I’d try to taste everything they cook and smells and looks rather tasty....they can always taste my food if they want to I don’t mind!

But of course these are little things which they shouldn’t really stop me from being positive and excited especially now that the festive season is upon us. Although my hoomins seem to be rather old fashioned and they like doing things the traditional way they say....which means that they haven’t started as yet with the Christmas decorations and preparations which is rather annoying as I’m looking forward to all the mess that this year Tolkien most definitely would make especially now that he is almost double in size from last year and as stupid as he has ever been....Oh it’s gonna be such a fun to watch him destroy everything while I’d be just watching away from that mess and trouble....Especially this year as hoomins are preparing to go a little bit over the top so to make up for a rather miserable year....So hopefully the hoomins would soon start putting up all the decorations and the fun would finally start....hee hee!

Anymeows better go as Tolkien has been very quiet for a long time so it is time to wake him up and have a little fun now that the hoomins are finally asleep. 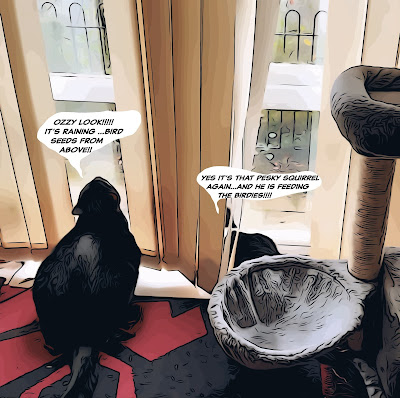