The ridiculous things that hoomins think that we sometimes do...all these unfounded accusations!

Well here we are again my fellow cats and hoomin followers another week has just passed and things seem to be getting better...well for meowself and Tolkien at least.

You see the weather is getting colder again and hoomins once again are spending a lot more time inside and they appear to be less inclined to go outdoors frequent...this is why I like sometimes the weather in this country....because the hoomins don’t! They tend to moan a lot about it and to spend a lot more time indoors than when it is nice outside...so then I can have the hoomins all to meowself and Tolkien too of course (by the way you can still read about our life at home and of course all about the good times we’ve used to have at home in the good old days before March when hoomins behaved like hoomins and they’ve used to go outside often...in the hoomins comic Life with Ozzy.. and Tolkien available on Amazon).

Of course and as I was telling you last week there are also some annoying things, some drawbacks when hoomins are at home all the time, things that hoomins tend to do. I’m not really talking about their obsession of doing what they call work for hours and keeping themselves busy in front of their computers or laptops…oh no this is not something that purrsonaly really bothers me. After all I’m a very considerate cat and I understand that hoomins also need some time to themselves on a regular basis so I do allow them to work for a few hours a day while I’m having meowself some power naps...besides they have to entertain themselves somehow when I’m not around to entertain them or when they are not needed to keep me meowself entertained....(not Tolkien!).

Oh no their work habit it’s not the issue really. It’s the other small things that they sometimes do that bother me…such as when they’re disturbing me while I’m trying to snooze by being inconsiderate and making too much noise or deciding to do some unnecessary housework and start cleaning the house using annoying loud electric monstrosities like different vacuum cleaners (by the way why hoomins are so obsessed with vacuum cleaning and using more than one gadgets to do so? Especially the big noisy one or the one that they call robot vacuum and which seems to go everywhere in the house and which also seems to like chasing or finding you around the house….wherever you are! You can’t even be safe under the bed these days….By the way what’s wrong with having some fur on the carpet? It looks better with some of Tolkien’s fur and mine than without it I say!). You know I like to be left alone when I’m having my cat nap and not to be disturbed by hoomins or Tolkien....by the way that kitten is so  beyond any help....he is totally stupid and I doubt it that he has any brain at all....I mean the things that he does or he finds entertaining and likes playing with are sometimes beyond any logic explanation and understanding....a good example is of course his latest toy....the hoomin’s old toothbrush...which he found it in the rubbish bin and decided to start playing with it in the kitchen and making so much noise that the hoomins and meowself have to go and see what he was doing....I mean how can you play with an old toothbrush...that doesn’t make any sense at all...even for a stupid cat like Tolkien!

So anymeows and going back to meowself and the hoomins disturbing me at times when I want to snooze for a while undisturbed...It’s not like I bother them when they sleep....I don’t! But of course hoomins being hoomins they’d find things to accuse you even if you are not responsible for any of them….You see my hoomins are keep telling me that I tend to snore very loud and as a result I even prevent them from sleeping themselves or be able to listen to the TV when I’m taking my nap on the sofa...which is of course totally absurd! How can a cat like meowself snores so  loud the he makes it impossible for the hoomins to sleep or listen to the TV....Cats don’t snore hoomins they only purr….soothingly!

Then there is also of course the little matter of sleeping on the hoomins clothes when they are being left on the chairs or sofa...well I have two things to say to such accusations ...one that they shouldn’t be leaving clothes around in the house in the first place as they don’t want us to leave fur around on surfaces and secondly....well if they insist on doing it then they shouldn’t  accusing me for making use of them....it is getting cold after all and I like sleeping on soft surfaces wherever I can find them....by the way I do not do zooping either…just gentle treading with my soft paws!

Also and not that I’m taking Tolkien’s side on this matter but again it is hoomins’ fault as they shouldn’t be leaving paperwork on desks, chairs or  any other easy to get to areas as Tolkien would find them and chew them as per usual....so the hoomins shouldn’t blame Tolkien it’s their own fault after all....Tolkien is being simply Tolkien and he would chew anything that he can find....well if it looks like paper, cardboard or plastic that is....although hoomins are quite good at hiding plastic from him these days!

It’s all their fault really... they only have themselves to blame!

Anymeows better go now as the neighbour’s cat is outside again watching the next door neighbour’s cats sleeping on their hammock by the window....that poor cat is so jealous of us...she is always watching us and wanting to be indoors like us it seems! 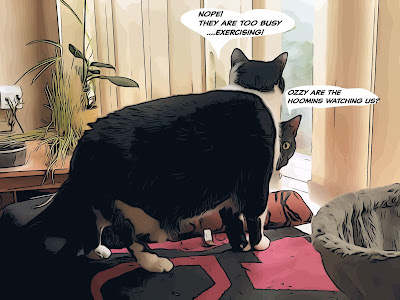