New toys and bananas with new boxes...what hoomins are up to now?

Here we are again, another week has just passed and having the hoomins at home day and night it has now become the new norm. At least they seem to have adapted quite well to the life indoors and now things seem to have gone into some kind of routine, sort of....but you already know of course that us cats like routines in general and we are not big fans of any changes....changes are not good really for mental and physical reasons!
(By the way you can still read about our life at home and of course all about the good times we’ve used to have at home in the good old days before March when hoomins behaved like hoomins and they’ve used to go outside quite often...in the hoomins comic Life with Ozzy.. and Tolkien available on Amazon)
But of course and rather unfortunately hoomins don’t think the same as they always seem to like changing things or at least replacing old things with new ones, you know newest versions....especially when it comes to their gadgets.
So now that my hoomins are at home all the time they have become a bit more obsessed (then usual of course) with bringing home new gadgets....because they say they can make life easier....hmmm! Not really….I think that my hoomins are probably bored and they try to find new ways to keep themselves entertained with new things....a piece of string in my opinion would do the trick instead....hours of fun for the hoomins and meowself....and Tolkien of course! No need for any new gadget to invade our home I say!
So now we have at home a gadget for almost everything and some of these gadgets are rather annoying and in particular those that they are moving around the house for example and they supposedly are doing useful things like cleaning our mess....which is of course a lie....meowself and Tolkien are not in any way responsible for any mess at home....it’s all the hoomins, they have become very messy and sloppy now that they are at home all the time!

But of course it wouldn’t have been that bad if hoomins were just buying toys for themselves only and kept us out of this new technology trend  that seems to be invading our home....you know toys that stay out of our own way....But no because hoomins are hoomins and they can’t help themselves they’d then try to inflict their own obsession to us as well. So now we are also getting new toys that they are not only moving around but also it seems they are trying to chase us around the house instead of us chasing them.....Well sort of…I mean I don’t know if this is actually a hoomin plotting or something so to get meowself and Tolkien on to exercising and doing cat yoga or something but this new robot toy hoomins got us is really mean....it’s evil!
I mean it has this nice and lovely feather and when you try to get it suddenly starts moving around and runs away and when you try to catch it then it’d start flashing different colours and then it would turn and it’d start chasing you instead....I mean that evil robot is actually stalking you....then it would stop suddenly and it would play dead for a while. It won’t  move or make any noise and when you’d try to get closer it’d then start moving again and you won’t know whether to chase it or not....Actually that silly annoying robot thing is very good in avoiding obstacles in its way like the hoomins cleaning gadget when it’s lose in the house.....It is a very strange toy and meowself and Tolkien haven’t still figured out how to get to that lovely feather it’s carrying….but we will in the end of course. Not toy robot can outsmart meowself….Tolkien not so much though!
Well at least the box it came…was nice as it was a very good size to get in but unfortunately I didn’t have the opportunity to check it thoroughly  as Tolkien started chewing it and now it’s in many pieces on the carpet! Yes Tolkien of course....who keeps getting stranger and stranger as each day passes by....He likes stranger things like chewing things and in particular boxes and paper so hoomins now have to always keep an eye on him at all times....You don’t know what he might start chomping next....
But I guess I shouldn’t be complaining too much really....hoomins are trying their best to keep us entertained especially now that they are at home....They did get me my new banana as the older one got a bit ...well you know was a bit over used (I blame Tolkien of course with his kitten teeth...).
To be honest though I don’t really know why I like bananas so much....but there is something about them....maybe it’s the shape or the catnip inside....who knows...They are my favourite nevertheless and hoomins always make sure that I have a new banana when I get bored with the old one but of course now with Tolkien around I don’t get to spend too much time with it as I’ve used to before....Again blame Tolkien for wanting everything and being such a  strange cat as well!
Anymeows better go now as everything it is rather quiet and Tolkien has finally left my banana alone!
Purrs and meows till next time!
Before you go and if you want to check that mentioned above comic...Life with Ozzy and.. Tolkien is now available to download or buy on Amazon
There are also new range of products bases on our new comic Life with Ozzy.. and Tolkien available to buy ...the Comic Collection
Ozzy and Tolkien would like to ask you to donate if you could so to help us with the ever expensive vet bills of our senior cats so they can have a good old age.  So please PayPal Ozzy and Tolkien’s hoomin. Thank you!
Don't forget to check my hoomin's site on Cat Behaviour if you want some advice...hoomin says that I am really good at giving good advice to hoomins! 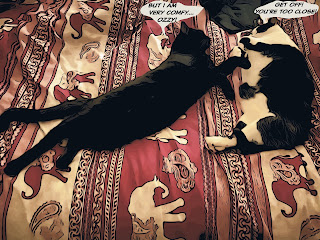