About such silly things as bullying and any other false accusations that you might have heard....

So here we are again, at the start of another month, the first summer month of course and things once again haven't changed that much....well OK maybe they have changed a little bit....not sure if it is for the better or the worse though! Hoomins going outdoors again….hmmm!
Well and anymeows my hoomins are still at home full time and now I know for certain that they have become indoor only hoomins. Although the other day they did something very peculiar which kinda surprised both meowself and Tolkien....because and as you’ll see it was so out of character for my hoomins to do so....Very unexpectedly they both went outside at the same time, you know together....Of course they do still occasionally go outside for some time, mostly to do what they call shopping especially one of my hoomins at least but never together. They haven’t gone outside together for many many weeks now...But that wasn’t the only thing that it was strange....no, no! It was the time they went outside...very very early in the morning....Meowself and Tolkien were still asleep on bed when the hoomins, OK, one of the hoomins got up (the other hadn’t gone to bed yet it seems) and then they both went outside for sometime. They were talking about doing something like watching some kind of birdies and wildlife of some sort that apparently  it needed to be done early before other hoomins were out and about or other birdies or something similar….which of course it didn’t make a lot of sense!
Well the whole thing it was too ridiculous in my opinion as they could have easily watched the birdies from the livingroom or bedroom windows since we get a lot of birdies on the feeder (along with that pesky squirrel of course and who by the way is back again....yesterday he spend most of the afternoon in the feeder chomping away all the poor birdies food....such a troublesome bushy tail creature) and of course and most absurdly the idea of actually seing any hoomins outdoors...really now, they are no hoomins outside anymore or at least they weren’t any till recently of course! (By the way you can still read all about our life at home and of course all about the good times we’ve used to have at home in the good old days before March when hoomins behaved like hoomins and they’ve used to go outside often...in the hoomins comic Life with Ozzy.. and Tolkien available on Amazon)

Although today I must admit I’ve spotted quite a few to he honest (you know pesky hoomins not squirrels) something that both meowself and Tolkien didn’t really like. To tell you the truth I do prefer it when other hoomins are not around and my own hoomins are at home all the time! You see when hoomins are not around there are more birdies and other animals around and the parks, canals and other places where the hoomins can’t go anymore are staying clean and look nice without all that rubbish that hoomins often leave behind....As for my own hoomins and as I’ve said it before I like to have them around all the time to give me the attention I want, to entertain me and of course to keep my food bowls full at all times. They are good servants my hoomins you see and I do prefer to have them indoors every day and night....besides without the hoomins around that pest Tolkien would have been too much to cope with.
You know as I’ve mentioned it before many times now that he is such a bully and always gets me into some kind of trouble and manages to convince the hoomins to take his side because he makes all these cute noises/meows and pretends to talk to hoomins which of course and as we have already established they really love it when we meow to them and act like we are talking to them and we are having a serious conversation....not true as hoomins don’t understand a meow we are saying of course!
But Tolkien when we are playing and I’m doing him here a favour and play with him when he constantly nags me to play even when I’m not in the mood to do so he often acts like he is being tortured or bullied by meowself....Then the hoomins believe that we are playing too rough and try to intervene so we don’t get too far, like we don’t know how to stick to the rules when playing…we are cats after all, not silly hoomins!  So and as I’ve said it before all that noise Tolkien is making and pretending that I’m rough handling him and even goes to such length as to let his fur come loose so the hoomins can find it on the carpet and think that I’m responsible and that I’m actually pulling his fur with my teeth and claws is only an act, he just plays the drama queen and the whole thing is absurd really!
So one more time and to to be totally clear on the matter I’m not bullying Tolkien and I’m not playing aggressively with him or the hoomins....I’m very gentle with Tolkien (and the hoomins) even if he is quite big now and still very stupid....

I mean and seriously now what cat cat could have ever been scared of something that silly as the hoomin’s flip flops and go into hiding when he sees the hoomin wearing them and walking around in the house....they are not any new strange species and they are not a threat to anybody… they are just hoomin shoes which she always wears in the summer when it’s hot! Such a stupid kitten Tolkien still is!
Anymeows better go now as Tolkien tries to get my attention again and I’m really pooped! Besides hoomins are too busy and they try to ignore him...perhaps if the hoomin has refilled my bowl again I could try to ignore him too!
Purrs and meows till next time!
Well and if you want to check that comic...Life with Ozzy and.. Tolkien is now available on Amazon
There are also new range of products bases on our new comic Life with Ozzy.. and Tolkien available to buy ...the Comic Collection
Ozzy and Tolkien would like to ask you to donate if you could so to help us with the ever expensive vet bills of our senior cats so they can have a good old age.  So please PayPal Ozzy and Tolkien’s hoomin. Thank you!
Don't forget to check my hoomin's site on Cat Behaviour if you want some advice...hoomin says that I am really good at giving good advice to hoomins! 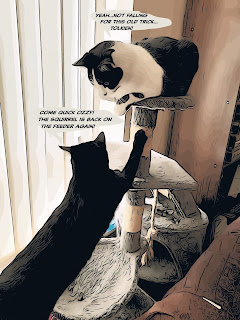