Hoomins sometimes can be rather frustrating to have around...

You know that I like my hoomins, they are good hoomins as hoomins go and they do try to meet my needs (not discussing here Tolkien’s needs as he has far too many who no hoomins can ever satisfy no matter how hard they might try....strange kitten indeed!). You’ve noticed here of course that I’ve said that they try because sometimes I’m not totally convinced that they really want to and that they do try....yes, sneaky hoomins!

You also know of course that hoomins are not very good at keeping their promises, they often  say that they would do one thing and then they’d do something different or they’d change their mind. You know for example, when they are saying that they’d fill up your biscuit bowls when they are empty and then they don’t do it for hours and they don’t even seem to care that you have become weak and feeble and that you are at the point of starvation. Sometimes of course they even come up with the most ridiculous excuses! I mean why I should care that there are no biscuits in the cupboard. Not my problem you know, if they’ve have run out and there are no more biscuits then they should go out and buy some more....it’s their job of course, not mine!
Oh those hoomins they can be so cruel and insensitive at times! And of course I’m expecting them to get me the biscuits that I do like and not the ones that they are available or the ones that they are currently on sale!
So and for pity’s sake, who do they think I am, Tolkien? I mean that kitten these days can eat anything and he doesn’t mind or seems to care what hoomins put on his bowl or leave on their plates!

You know and as I was telling you last week Tolkien seems to be going through a strange phase in his life as he likes eating all sort of things, like chewing paper and cardboard boxes among other things....and oh boy did he eat a lot of boxes last week or what!  And the mess he made....I’ve started even feeling sorry for those hoomins having to constantly clear after his mess...everywhere....we are still finding tiny pieces of cardboard and paper these days around the house, even in hoomins’ pockets!
But it’s not that he likes paper, cardboard boxes and even plastic bags which hoomins had to keep away from him and even bought him a couple of new toys to keep him busy and distracted (it kinda work as he can easily get distracted....I’ve told you he has no brain really), oh no he now likes other stuff too! He still likes eating some of the hoomins’ funny tasting food such as that horrible black stuff that they call marmite and which smells and tastes horrible as well as hoomin’s breakfast something called oats so simple apparently and which again tastes absolutely disgusting....This week though he has developed a new obsession as he seems to have discovered crisps and he now bothers hoomins to give him some of these crisps to eat which he simply seems to  love even if he finds them a bit hard to eat... but he would lick and lick them till they are soft to eat....Hoomins of course who they don’t really like sharing their food with him try to keep him away but Tolkien can be quite stubborn of course at times and he would then try to steal hoomins’ crisps by putting his paw inside the bag when he gets the chance....yeap, hoomin not pleased at all! Tolkien likes stealing food from hoomins in general though and he would try everything that hoomins eat if they let him....
Oh well I do blame of course hoomins for Tolkien’s bad developed habits as they let him get away with everything....he is a far too spoiled kitten....unlike meowself of course who I only get what I want and need from the hoomins without much fuss!
Anymeows and back to these pesky hoomins again who’ve deliberately forgotten to get me my biscuits...well they’ve learned their lesson this morning
while meowself and Tolkien had an early morning play session which included a bit of running and a lot of jumping on the bed while the hoomins were trying to sleep....well they had an earlier start of the day that they were planning to…
I hope though that they’ve learned their lesson now and they finally got me my favourite biscuits, Better go and check now!
Purrs and meows till next time!
Before I go though I would like to mention once again that if you feel generous and you want to help some of our senior cats with their vet bills so they can have a good old age you can do so by donating: So please click here:
!!!NEW!!! If you want to have a portrait made of your furry companion check this site for more details at: Dog Art
Also you can buy some of my own range of products, the Ozzy Superstar range here too:


Don't forget to check my hoomin's site if you want some advice about Cat Behaviour...hoomin says that I am really good at giving good advice to hoomins! 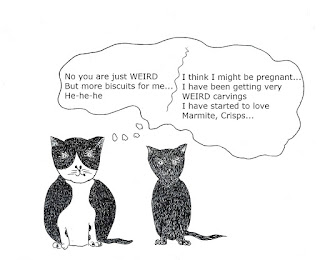