Things still are not getting any better and Tolkien has developed some stranger behaviours!

So here we are at the end of the first month of the new year and things haven’t improved yet or at least gone back to be as they once were (ahh the good old days of last year!)...Hoomins are still talking all these nonsenses about doing big changes in our lives and moving to new and sunny places....yeah this is going to happen, not! It’s all a strange disease, a phase as hoomins sometimes say and it will soon pass, I hope!
But the problem currently is not really the hoomins and their own peculiarities but the peculiarities that I see on Tolkien as each day it passes by and he grows up to be soon a full grown cat (good grief!). He is so strange this kitten that even hoomins seem to agree with me, even if they are still believing in fairy tales, that Tolkien is actually a handsome fellow (by the way I am the handsome fellow in this story) or a pretty cat....I mean he is not pretty at all…for starters he has the longest tail I’ve ever seen in a cat (and of course I’m comparing to my one which it’s a normal pretty tail of a cute cat like meowself). I guess though that it perhaps does help him a little when it comes to jumping in high places. Then of course there are all those nipples…so many nipples which hoomins say they look like buttons (which I guess explains why he was found the other day by the hoomins wearing one of the hoomin’s bra and wandering around in the house...I sincerely hope that this was really the only reason of course as Tolkien is already too peculiar as it is!).
Along with his normal strange behaviours which we all are familiar with by now he has also developed some new ones which they could be seen as being even worse than his previous ones....I mean he has now developed this new obsession of trying to behave like a normal cat and he is now attempting  to cover after he has been to the litter tray. You know how things are…he has been watching me and he likes to copy what I do....but as I had said it many times before he is terrible at learning anything that it can be of any use that is! So instead of covering like a normal cat would do with what there is available to use instead he is trying to cover by using the sides of the tray, the floor outside.....with no much success really, but as hoomins say at least he tries. In his last attempt he manage to use one pellet to cover....someone might say that is a start but I still believe that he is totally hopeless and he is never going to learn...sorry hoomins Tolkien is not capable and clever like meowself....it is time to accept the facts!

Then there is the other bad habit that he has recently developed and which habit hoomins are not so keen on at the moment! He likes destroying boxes and in particular boxes that hoomins keep things in....You see there were 2 boxes on the bedroom unit that Tolkien was using to jump onto the top of the door and now there are only the one...Tolkien has managed to completely destroy one of them, lid and all (and it wasn’t because I’d used to sit on them, that was a long time ago before Tolkien started using it as a trampoline of course). So the other day one of the hoomins found Tolkien with his head inside the box with all the hoomin’s CDs....hoomin was not pleased at all and he told Tolkien that he would not find any Cat Stevens CDs in there....I’m not sure what hoomin meant by that but the other hoomin started laughing!
As for the lid of the box....oh yes it had a terrible fate as Tolkien now has a new obsession! Eating cardboard (along with paper of course)....He likes eating cardboard and making a whole mess in the process...so that poor lid had a terrible fate at the teeth of Tolkien....it ended up in many many many pieces. So Tolkien got his own box for a while before of course downsized it very quickly....
Hoomins of course they are not very keen with his new obsession as he tends to chew everything that looks like paper or any cardboard box he finds and of course and as a result he leaves a lot of mess everywhere! Nope not so happy hoomins especially since Tolkien managed to make a big mess on the clean kitchen and living room floor yesterday. Of course and to be honest this last obsession of Tolkien doesn’t really bother me that much....after all if he eats paper and cardboard that means that he doesn’t eat a lot of the food and in particular my food (although he still eats quite a lot and especially biscuits....).
Anymeows better go now....things to do and see....what Tolkien has eaten now!
Purrs and meows till next time!
Before I go though I would like to mention once again that if you feel generous and you want to help some of our senior cats with their vet bills so they can have a good old age you can do so by donating: So please click here:
!!!NEW!!! If you want to have a portrait made of your furry companion check this site for more details at: Dog Art
Also you can buy some of my own range of products, the Ozzy Superstar range here too:


Don't forget to check my hoomin's site on Cat Behaviour if you want some advice ...hoomin says that I am really good at giving good advice to hoomins! 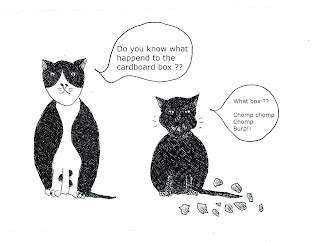