Oh no, it is this time of the year again....and I’m not feeling very festive!

You see, us, cats understand and we are aware of certain things such as hoomins’ holidays, certain days of the year which for some strange reason hoomins think they are special!  During these ‘holidays’ hoomins get really excited about and then they often behave rather silly....sillier that normal that is…A good example of course is this time of the year which hoomins celebrate in very strange ways!
So and to be honest I don’t really understand why hoomins get excited about this time of the year and they behave in such peculiar ways…for example by bringing trees from outside indoors and then by also putting shining things on them so to make them look festive....hoomins let me tell you a little secret then…there is no need to add anything to that tree it is pretty as it is....no need for extra shining bits or flashy lights....leave it  as it is (not of course that any hoomin would ever listen since they believe that they know everything!).
And it’s not just the poor tree that hoomins like decorating, it’s often the entire house and then there are  ornaments hanging from everywhere and flashing lights (they even add some to my scratching posts)...lots of them especially at the windows....such a mess! I mean the house was nice and tidy before and now looks to be in such a terrible mess with all these unnecessary decorations which hoomins insist on putting every year at the same time...

Of course it is not the decorations as such that I mind or the fact that we now along with the plants we have a tree in our house as well….oh no! I can live with trees and shiny objects and flashy lights! It’s the fact that hoomins are then becoming obsessed with that tree and all these over the top decorations and they do not even let us (meowself and Tolkien of course) to get close to that stupid tree to thoroughly investigate it....you know have a proper sniff and check those hanging balls…whether they are firmly attached to that tree or not…sooo annoying!
But I have been living with my hoomins for a long time now and I have got used to their peculiarities....besides they only last for a few weeks and then everything gets back to normal but this year of course things are a bit different! This year there is Tolkien of course and this is his first experience of Christmas and of hoomins behaving....well rather unusual than normal.
I must admit though so far he has taken it quite well....He got scared at first with the appearance of that  tree and all the decorations but now that he got used to it he is behaving almost like a normal cat....playing and knocking over some of the baubles....mostly when hoomins are looking of course so to get the desired attention! Because of course he is still quite young and inexperienced and this is after all his first Christmas hoomins are very tolerant with him...so far! But annoyingly he hasn’t been that destructive though…which it has been a bit of disappointment I admit as I was expecting a bit more from Tolkien…more of a catastrophe with the tree and the rest of the decorations! But nothing that drastic has happened so far as  Tolkien has been very constrained, which is not at all like him, what a shame really!
Of course not everything during this festive season is all bad as hoomins tend to also become not only very peculiar but also a bit more extravagant than normal especially when it comes to their food....you see this time of the year they also tend to eat and drink a lot more than usual!  But then again is not as abundant as it could have been for meowself since one of my hoomins doesn’t eat meat or fish...(don’t ask me what he eats...I have tried some of his food and believe me when I say that it is just horrible...no taste whatsoever…no one should be allowed to eat that kind of food if he is not been punished that is). Of course I can’t really complain as the other hoomin gets plenty of fresh meat, such as chicken which of course she can’t really manage to eat all by herself so she’d then share with me....and probably Tolkien this year too, grr! But seriously now why hoomins are making themselves suffer by eating food that no living being should be allowed to eat? Can’t understand it....strange hoomins!
The other good thing about holidays is of course that hoomins tend to stay at home for days instead of going to work every day....which also means a lot of attention and proper and extra feeding times....for meowself….and pest Tolkien of course!
So I guess Christmas holidays are not that bad after all....as it is only once a year we could let hoomins be silly for a little while then...let them have their fun for a few days at least, it won’t harm them after all!
So happy Christmas to all cats and their hoomins out there!
Merry purrs and meows to all!

Before I go though I would like to mention once again that my hoomins are trying to raise money to help older cats such like Choo Choo and Faith were with vet bills as their treatments can be very expensive since insurances don’t cover senior cats treatment for life (not fair really as we can live a lot longer now and some of us need medical treatment)...so if you feel generous and you want to help cats like Choo Choo to have a good old age you can donate by clicking here:
Also you can buy some of my own range of products, the Ozzy Superstar range here too: 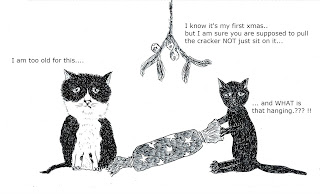