Tolkien and hoomins can be such a disappointment at times…especially this time of the year!

You know and as I’ve mentioned it last week I was looking forward to the last weekend...You see I was hoping that I would have a bit of fun with Tolkien and the hoomins of course...But of course hoomins because and as always they tend to be late doing certain things as apparently they prefer doing things the old ‘fashioned way’…as they are keep saying...Like for example decorating the Christmas tree only a week before Christmas like they’ve used to do in the ancient times apparently....Well I don’t know about your hoomins but my hoomins are really really old....well in cats years of course.
So they were planning to sort out all the Christmas decorations for this year over the last weekend so they could keep an eye on Tolkien as this would have been his first ever Christmas and because of course he seems to like climbing on things...hee hee but of course and as my hoomins tend to be not so trustworthy after all as most hoomins are anymeows they didn’t do what they’ve said they would do....So there was no tree or decorations to be seen on Saturday or Sunday....so disappointing really! Apparently one hoomin wasn’t feeling that well on Saturday and the other on Sunday and as a result most of the housework wasn’t done properly all weekend....pfft those lazy hoomins they are always full of silly excuses....I don’t think you see that there was anything wrong with both of them anymeows! In my opinion I believe that they were both just being lazy and they couldn’t be asked to do the tree and decorations....soooo disappointing! You see I was expecting so much from Tolkien since he likes so much climbing on everything and exploring and breaking new things....but I was to be disappointed not by Tolkien but those pesky hoomins instead!
So nothing really exciting happened over the weekend other than meowself and Tolkien trying to rearrange for the hoomins the carpets a few times...but I don’t think that they were that keen on the idea of moving the carpets the way we’ve rearranged them with Tolkien as they’ve kept putting them back again and again and again....so stubborn these hoomins at times!
So Monday then came and it looked like it was going to be a normal boring one but then again hoomins changed their minds once more and they’ve decided that they were going to put up the Christmas decorations after all! So yes despite a rather disappointing weekend this Monday evening was starting to look like it was going to be a rather interesting one after all!
So all the boxes with the decorations and trees came out and I was there of course helping the hoomins as I would always do by checking the boxes to make sure that they were the right ones after all and of course  I was also hoping that Tolkien would be his normal kitten self and would start getting involved and start destroying and knocking over things like Christmas lights and baubles and annoying hoomins so I could finally have my fun! But then disaster struck.....Tolkien was scared of the Christmas decorations the tree and of all these bright lights so he stayed away and didn’t give a paw to help the hoomins while they were sorting out the tree and the decorations....I mean he didn’t even come close to check any of the Christmas baubles...they were shining and very inviting to be knocked over from the tree when hoomins hang them but Tolkien didn’t even come close to sniff that darn tree....

I mean what kind of kitten is he after all....is he really a kitten or what? How is it possible that he would climb onto doors and cupboards, he would investigate and check out everything in the house but when it comes to the best toys of the year that any cat could have, a decorated Christmas tree then he is not interested at all? That’s so annoying....so disappointing I was so expecting to see decorations being knocked over and the tree perhaps in a horizontal position after his attempt to climb on it and the hoomins of course shouting and getting really annoyed with Tolkien that everything that has happened so far today it seems so unreal....this is not happening to meowself! Tolkien is not being Tolkien, what is wrong….what’s going on in the world, is it coming to its end?  I can’t really understand it....unless of course it is just a little phase he is going through or he is not feeling himself today....It is quite possible of course that he is having a day off or something and hopefully things would go back to normal soon and trees would fall down! Let’s hope so, otherwise Christmas would be very boring this year....Hoomins can not have two good cats to praise and give treats this festive season...it can only be the one, meowself of course.
So I would have to wait for Tolkien to start behaving like himself so I can enjoy my holidays....very soon hopefully.
Till next time then
Purrs and meows!
Before I go though I would like to mention once again that my hoomins are trying to raise money to help older cats such like Choo Choo and Faith were with vet bills as their treatments can be very expensive since insurances don’t cover senior cats treatment for life (not fair really as we can live a lot longer now and some of us need medical treatment)...so if you feel generous and you want to help cats like Choo Choo to have a good old age you can donate by clicking here:
Also you can buy some of my own range of products, the Ozzy Superstar range here too: 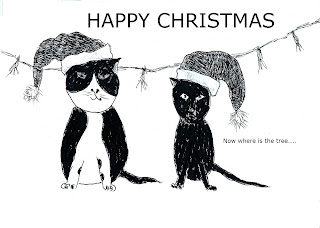