Hmmm….Holidays are not that bad after all....especially when hoomins are around!

So and as I was saying last week, we have come to that time of the year once again, which time of the year hoomins seem to particularly like as they tend to spend a lot of time at home doing not a lot and to eat also a lot more than usual....(and then complain that they have put on a lot of weight…pffft!).
As I was saying last time, hoomins usually are behaving a lot more strange than usual this time of the year...they seem to be doing things that defy anybody’s logic such as bringing trees from outside inside and then try unnecessarily of course to make them look pretty by adding shining round things and bright lights as well as adding other similar bright things and lights in the rest of the house as well...All very peculiar and an inconvenience to us, cats, as hoomins expecting us not to touch them or to even get close to them and they would get annoyed when accidents do happen such as when some of these bright balls from the tree fall down because of natural causes of course such as the law of the gravity and not because we’ve got involved in any way…naturally!
Of course hoomins do tend to spend also a lot of time during what they call the festive season at home but as they can’t be around all the time such as at night hours when they have to go to sleep then they’d leave things for us to explore and investigate, which it can be a lot of fun especially when there is a kitten around, named Tolkien and this is his first time of experiencing hoomins festive celebrations... he he! I must admit that at first I was a bit disappointed with his original reaction towards the tree and home decorations but soon enough he came back to his senses and behaved as it was to be expected from him....you know behaving like a kitten after all!

Although at first I wasn’t so keen on these strange hoomin festivities as and let’s face it they did interrupt my daily routine as the house looked quite different than normal (such a mess really), after a few days I’ve came to the conclusion that things weren’t that bad after all, there was hope for fun and exploration!
You see there are a lot of positive things that tend to take place during these days. For starters hoomins as I’ve said it before tend to spend a lot more time at home which means that we are also getting a lot more attention than usual (regular feeding times) as well as spending a lot of time in the kitchen helping the hoomins with the cooking and baking (by the way all those white paw prints on the kitchen counters had nothing to do with me…it was all Tolkien of course)! They do tend to do a lot of cooking than they will normal do any other day of the year, especially on Christmas day which means there is a lot of food to go around as they tend to cook more than they can eat...some of which food they will also share with meowself and of course Tolkien....
You see I’ve always thought that it was a bad thing having one hoomin that doesn’t eat meat or fish but not so much during this festive season....one meat eating hoomin is better than two I say as she can’t eat a whole chicken herself....and the other hoomin can’t help either....so us, cats would of course volunteer to help....I do like roast chicken or any other type of bird she decides to cook (I’m not that fussy, really)....So yes this festive season is proving to be quite good for my belly after all (and nobody mentions my belly either…hoomins are worrying more about theirs!).
Then there is of course the other good hoomin habit that I like a lot during this time, you know, of giving presents...which means a lot of extra toys for meowself and Tolkien along of course and most importantly with lots of boxes of different sizes and lovely paper to chew and play with....
So yes I came to the conclusion that hoomins winter festive season is one of my favourite times of the year....too bad that it doesn’t last for too long and it’s only once a year....at least I get to keep many of those lovely boxes and I’m not sharing any of those with Tolkien....is bad enough having to share some of my food....he is not having any of my boxes!


Anymeows better go now....
Purrs and meows till next time!

Before I go though I would like to mention once again that if you feel generous and you want to help some of our senior cats with their vet bills so they can have a good old age you can do so by donating: So please click here:


Also you can buy some of my own range of products, the Ozzy Superstar range here too:

Don't forget to check my hoomin's site at: https://spark.adobe.com/page/YBJTtEaio7uac/ if you want some advice about cat behaviour...hoomin says that I am good at it! 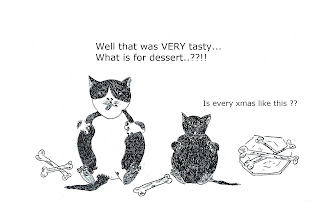