Be weary of lying hoomins…Tolkien has not changed..he is still very annoying!

You know, hoomins tell a lot of lies and they are not to be trusted  despite their usefulness at times…They’ll often promise you that things would change and that life would get better, etc, etc...which are all lies as nothing really changes. Not of course that I like changes, I’m a cat after all but little changes are not always bad....they can have their own merits at times!
Of course to what I’m referring here is Tolkien...who else (the kitten that has turned my life to a living nightmare…well most of the time anyway as he does have some good but rare moments I do admit)? As you probably have figured it out by now, he is my biggest problem at the moment....as he is still quite young and very stupid and causes a lot of....accidents and very negative reactions from the hoomins, which also means that I’m getting often involved and suffer the consequences of his actions...(and no I do not copy Tolkien….malicious rumours of course that hoomins tend to spread…I’m not behaving like a kitten naturally!).
But you see I have been very tolerant so far because I’ve believed and trusted the hoomins when they were telling me that things would eventually change as he gets older and especially after his vet visit of course, which as you probably already know it took place more than a week ago.....Yes we had all that ‘feel sorry for me’ nonsense for a while and Tolkien did milk it to get sympathy and a lot of attention from hoomins, which of course never worked with me….I’m not that gullible like those pesky hoomins, you see!
But of course and more to to the point I was making, the fact is that hoomins lied to me as nothing has changed since Tolkien came back from the vet....and even after his second visit which  I must admit did make me hope for a little while that it might be a permanent solution and there was the possibility that Tolkien might be even staying there at the vet’s for good....you know going back to the vet’s so soon it kinda suggested that something might be wrong, a rather attractive possibility ....you know that they might want to keep him there for good...after all he is a rather cute kitten (in his own way I guess)...so I was hoping that they might consider keeping him....but no such good fortune, hoomins brought him back again....and he was like his old self...very very annoying.
So what has changed since that life changing experience? Nothing, absolute nothing....he is as he was before...loud with hoomins when he wants attention all the time (and even with me when we are playing so to get the hoomins attention and to make me look like a bully that plays too rough...and hoomins then blame me…pfft!), he is still very destructive, he likes clawing everything from furniture to the hoomins’ legs (he he, which they really don’t like it....but annoyingly they don’t seem to get that much annoyed with him) and even more annoyingly he still likes climbing on doors and cupboards but he is a little more clumsy these days...as he is getting a bit too big, hee hee....but still makes a lot of noise when he jumps up there and it feels like it has been an earthquake in the rest of the house. Worst of all is that now there is also that new diet regime which I must admit I don’t really like it….Well I know that last week I’ve kinda mentioned that it is a good thing that he now eats proper cat food but the truth of the matter is that now that he has stopped eating that delicious kitten food I kinda miss it! Now that the vet said that he should stop eating kitten food because he might otherwise start putting on weight (like meowself....yeah right) and therefore and from now on he should just eat normal food...I’m not so sure now that I like that idea after all! Besides the one good thing about having him around was the food he was eating (very tasty) and now that this has stopped as well....what are then the benefits of having Tolkien around? I can’t see any hoomins.....do tell me what are they?

But of course the time would come very soon when hoomins would ask the same question as it is after all this time of the year once again…you know what hoomins call Christmas, when they are decorating trees inside the house and they expect us cats to just look at it without even go near to sniff it.....But then again I don’t meowself find it that interesting...anymore anymeows as there isn’t anything usually worth checking on that tree....in my honest opinion of course! So this year of course would be Tolkien’s first experience with the Christmas tree and as we all know now too well he loves climbing....so I’m expecting to have some fun this year while hoomins would be trying to keep Tolkien away from that tree....revenge would be all mine!
But of course this is something for next week’s blog when the tree comes out over the weekend! I’m sure I’d have a lot to tell by then!
So purrs and meows till next time then!
Before I go though I would like to mention once again that my hoomins are trying to raise money to help older cats such like Choo Choo and Faith were with vet bills as their treatments can be very expensive since insurances don’t cover senior cats treatment for life (not fair really as we can live a lot longer now and some of us need medical treatment)...so if you feel generous and you want to help cats like Choo Choo to have a good old age you can donate by clicking here:
Also you can buy some of my own range of products, the Ozzy Superstar range here too: 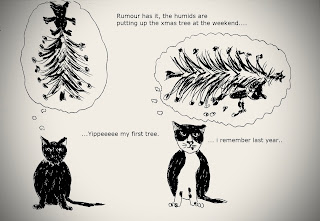