An unexpected visit to the vet...Tolkien is not the same kitten anymore....

Well last week was definitely an adventurous one...well for some of us, anyway! Yeah and the weather has changed as well....brr is rather cold...winter is here...well at least this is what hoomins constantly moan about the last few days as apparently it is rather cold, not that I would know anymeow....or that I care about the weather in anyway....hoomins problem, if they want to go outside then they would get cold....their problem, pfft!
Anymeows and as I was saying about last week...well, yes, last week it was a bit different than any other week as Tolkien finally had that dreaded visit at the vet’s, which visit those pesky hoomins were planning for a while now! Poor Tolkien, he was totally taken by surprise and he wasn’t expecting to be betrayed by his hoomins (well, he should have listened to me as hoomins are not to be trusted...they are very sneaky at times and one has to be very weary of them at times!).
The whole thing was a nightmare for both of us, seriously now....It started on Wednesday night when all of the sudden all the food suddenly and very unexpectedly....disappeared. There was no food or biscuit bowl to be found anywhere....You see one minute all the food was there and the next...poof it had gone....nothing to be found...Of course and for a while there was a bit of panic as the possibility of starvation all of the sudden became a reality and it worried me…a lot! But luckily it was a false alarm...the starvation period meant to be for Tolkien only so hoomins save me and gave me some of my food secretly away from Tolkien’s beady eyes...I didn’t understand it at the time why Tolkien wasn’t supposed to eat anything at all but then again it wasn’t really my problem as long as hoomins were keeping my bowl full and away from Tolkien....everything was fine for me!
So Wednesday night was a strange night especially for Tolkien who the hunger was driving him insane and he was acting out of his mind....he was trying his hardest to get some food from the hoomins but they kept ignoring him till the morning came.....Then things got a lot worse for Tolkien as the cat basket came out and I knew then and there that something terrible was going to happen....Again Tolkien choose to ignore all my warnings that the hoomins were up to no good and he started treating instead the basket like a new toy and a place to get into and explore, which of course it was what the hoomins wanted him to do in the first place, cause as soon as he was inside he was trapped and the door was closed...no escape for Tolkien (well not that I was feeling too sympathetic he had it coming after all that stupid kitten and I was quite aware of where that basket would take him....to the dreaded vet of course). Tolkien wasn’t pleased to find himself trapped inside so and as it was to be expected he started his loud meowing singing as he was hoping that the hoomins would feel sorry for him and they would let him out....but hoomins had other plans for him that day and a vet visit was part of that plan...So they took a very annoyed and scared Tolkien (at that point I kinda felt a bit sorry for that kitten even if he is in most cases a pain in my....hmm, you know the rest I think).
So after a while one of the hoomins came back but with no Tolkien or basket and although it felt strange for a while not having a kitten driving me insane constantly but very soon and as it was rather peaceful and I was getting a lot of attention from my hoomin (and all the food and biscuit bowls reappear again with fresh food and biscuits) things started looking promising after all....I wasn’t missing that pesky kitten at all. Life without Tolkien was good and I could have easily got used to be on my own at home with the hoomins....
But unfortunately good things don’t last for very long as after a while the other hoomin came back and guess who she brought back with her….. Yeap, Tolkien in the basket (rather quiet this time around) was back home again....
At this point I was going to get annoyed with hoomins for bringing him back but Tolkien didn’t look himself at all! He was smelling a bit strange, he was acting and walking funny and he couldn’t even meow properly....He was certainly not the same Tolkien from this morning....he was definitely different….perhaps she has brought back an improved Tolkien? I could only hope at this point!
So thanks hoomins for making Tolkien being worse than he was already, now not only he doesn’t listen to me but he is also allowed to bully me.....Come on hoomins stop feeling sorry for him now.....he is absolute fine, he is still the little horror and force of destruction he has always been....
But at least now I can eat his food with clear conscience as he can now eat proper food like a normal cat and not all this kitten nonsense.....Finally something positive at least!


Anymeows better go now...need to check on the patient you see!
Purrs and meows till next time!
Before I go though I would like to mention once again that my hoomins are trying to raise money to help older cats such like Choo Choo and Faith were with vet bills as their treatments can be very expensive since insurances don’t cover senior cats treatment for life (not fair really as we can live a lot longer now and some of us need medical treatment)...so if you feel generous and you want to help cats like Choo Choo to have a good old age you can donate by clicking here:
Also you can buy some of my own range of products, the Ozzy Superstar range here too: 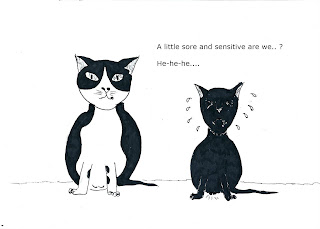