The secret to surviving a kitten is…I wish I knew really!

Well here we are again, another week has just passed and living with Tolkien is proving to be a living nightmare....seriously!
For starters Tolkien has become very demanding and loud for a kitten who, he shouldn’t know how to meow properly at his age....So he has discovered that hoomins can not resist his kitten (pathetic) voice and now he meows constantly at the hoomins who feel sorry for him and as result he ends up getting everything he wants, including getting his food first, attention all the time when hoomins are around and not getting into any trouble when he is being very very naughty!
Tolkien has become now almost impossible to have around as he has become indeed very naughty and doesn’t listen or pay attention to me or anybody else and because of his very kittish behaviour I’m getting into trouble as well....I mean he has become a destructive force so much now that hoomins have to keep him out of certain rooms especially the room that the hoomins call the office because the moment he gets in there he is bound to destroy something or at least knock things of their place, which of course it also means that I can’t get in there as well now too….grrr!
Wherever Tolkien goes these days you can clearly hear the sounds of crashing and banging as he has no sense of how to stop when he is running at full speed and avoid crashing into things....he is an uncontrolled small black bull, you know....
Then there is his other very annoying habit of always being everywhere you are and evenwhere you are thinking that you want to be next....I mean I go to my sofa in the living room and he is already there waiting for me to give him his grooming bath....(OK, it’s not only the hoomins that they might be spoiling him a bit....he might be getting some attention from me as well, he is still a big stoopid kitten after all), I try to go to my hammock and he is already there pretending to snooze, I climb on my boxes in the bedroom...yeap he is there as well....and of course he is always on the bed especially when hoomins are sleeping which makes it a bit of a crowded place with all of us together I mean hoomins are usually not very consider when it comes to their sleeping habits as they tend to take too much space on the bed and they don’t leave a lot room for us kitties to stretch our weary legs and paws...I mean you think that hoomins should know by now that when it comes to sleeping on the bed cats come first and then the hoomins of course.
Now and talking about Tolkien being everywhere at the same time (sometimes I do wonder how he manages to be in so many places at the same time....as this is something I could never do of course) which of course it can be very annoying he has also develop another bad habit of trying to take over of some of my own responsibilities such as helping the hoomins with their chores such as doing the bed (this of course used to be my job but now not that Tolkien is helping them I prefer to stay in the living room instead so I can catch up with my napping instead, at least some good can come out of this!). Of course and because he is still a kitten he can not help himself of doing things totally the wrong way....You see hoomins need assistant when they are doing the bed and not to play with Tolkien....he needs to learn to go undercover when hoomins are putting the bedsheets on the bed so to make sure that they are doing the job properly by taking their time instead of sitting on top and try to look cute....wrong, very wrong!

Then there is this newest adventure of Tolkien, his new climbing habits, as now and wherever he sees a door or cupboards high up and close to the ceiling he would then attempt to climb on top (not always being successful of course as sometimes he tends to rush and as a result he will then miscalculate the distance and he’d end up on the door and not on top of it!). But of course this sudden unnatural obsession of Tolkien to be always on higher above the  ground places might have some deeper meaning and it might be behaving this way because there is something seriously wrong with him...for example and now that I’m thinking about it this unexplained and strange behaviour it could be because Tolkien is not really a cat, something that which of course would explain some of his bizarre behaviours and his inability to learn any cats skills. I actually think that he is a bat and not a cat and I bet you any cat treats that very soon he would start hanging upside down from these high places....Yeap I got the feeling that hoomins got a bat instead of a kitten....
Then of course there is also the very recent developed bad habit of Tolkien as well...as now he tends to eat most of his food and he only leaves some scraps for me to finish.....which of course is not right...he doesn’t need to eat that much after all...he should leave most of the food for me instead as I’m a grown up cat and I need more food than he does. You know something I think that Tolkien is conspiring with the hoomins against me. I believe that they have brainwashing him so to believe as well that I’m actually fat therefore I shouldn’t be allowed to eat his food. This is the only logical explanation after all that makes sense as I don’t really believe for a minute that Tolkien needs or wants all that food....those pesky hoomins are behind this new plot to keep me away from my fair share of food....pfft!
Anyway better go now...Tolkien might have left some scraps on his plate for me...
Purrs and meows till next time!
Before I go though I would like to mention once again that my hoomins are trying to raise money to help older cats such like Choo Choo and Faith were with vet bills as their treatments can be very expensive since insurances don’t cover senior cats treatment for life (not fair really as we can live a lot longer now and some of us need medical treatment)...so if you feel generous and you want to help cats like Choo Choo to have a good old age you can donate by clicking here:
Also you can buy some of my own range of products, the Ozzy Superstar range
here too: 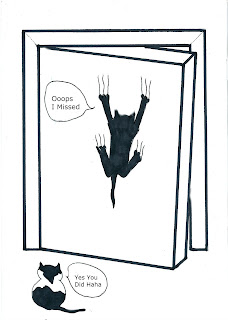