Hoomins are really bad at learning anything...they are worse than Tolkien it seems!

Well, another week has just passed and still I haven’t made any progress with Tolkien.... but at least now he has learned how to jump off the top of the door without hoomin assistance! I guess that is something positive....he is doing something on his own but he still makes a lot of racket when he jumps back on the unit...the whole place shakes like there has been an earthquake....I’m surprised the neighbours are not complaining or that we haven’t made the local news for the locally frequent tremors that do occur. But I guess he would end up getting bored with this new game soon enough...let’s hope of course that is sooner than later before he destroys the door or he...misses it!
But today I’m not going to complain about Tolkien....much, he is a kitten after all and he has no common-sense of brain it seems so to be held responsible for any of his actions....instead I would like to express my great annoyance with my hoomins and all the other hoomins out there of course as probably they are all the same! After all it is their fault, everything that it has happened from the moment they brought Tolkien home....First of all they’ve managed to find the kitten with no brain to bring home and secondly they’ve also decided to let him get away with everything just because he is young and stupid. I mean how is this really possible? Logic tells you that he would have been the one who gets blamed for everything and not the one who gets excused while the older and wiser cat gets blamed for some of things that he actually has done.....but again hoomins doing things the wrong way as always!
Then it is also the fact that often they don’t do the things they say they’d do....always going back on their word. Today for example Tolkien was supposedly going to see the vet for the big visit...hee hee (poor Tolkien) so I had really big hopes for the return of a different, changed Tolkien (you know....when there is sudden change of purrsonalities because of a certain procedure.....) and although I was feeling sorry for the little guy (well kinda...we all have been there when we were younger after all) but and at the same time I was looking forward to a few hours of being at home all on meowown without being constantly pestered by a kitten....So naturally and because hoomins were taking care of things nothing really happened. I mean he did visit the vet but nothing did happen...he had to stay off his food overnight of course.....poor Tolkien....I was surely thinking of him while I was having my breakfast and he was waiting expectedly from the hoomins to get his own breakfast....which of course it never happened....instead he ended up in the cat basket (well, he did get in on his own accord  after all and without any hoomin assistance....such a stupid kitten, going willingly to his own demise....pfft!) Of course and when he eventually realised and after the hoomin closed the basket door that he was going outside on an unfamiliar place he wasn’t very happy at all and made a lot of noises and attempts to escape....in vein of course! But because hoomins are not very clever themselves there was a mix up with the vet so Tolkien came back home without even actually seeing the vet....all this fuss and stress was really for nothing and my little break away from Tolkien lasted less than an hour....pfft hoomins, they can’t do anything right...
Of course this is one of the many examples of how hoomins are not very good in doing things properly...they are also very hard to train as well (even more difficult than Tolkien it seems if you believe it...) and to even understand basic given instructions....I mean I have been trying my hardest for the past few days to teach them to follow me in the kitchen when they come home from work so to fill up the bowls which they are of course empty and they don’t seem to be able to understand what they are supposed to do….very simple….just follow the cat as he shows you the way to the kitchen…Hoomins is not that complicated.....When a cat shows you the way you just follow and do what you are supposed to do, you fill up the empty bowls...very very simple! Three times I had to go to the kitchen and come back till hoomins finally got the message and decided to do what they are supposed to do....which it is of course the first thing they are supposed to do when they come home, to  feed the cats, well meowself first of course, Tolkien can always wait...he is still quite young.


How difficult is for hoomins to understand....phew! You know something, I think it might be better if I change my method of training with hoomins...I think I need to start using some form of vocalization...I know it’s very backwards, primitive behaviour for us cats that we have now evolved to such intelligent species who they don’t need to shout or meow to each other anymore but it might be the only possible way for them hoomins to understand! Yeap a few loud meows or more kitten meows like Tolkien does might do the trick after all! Such a hard work these hoomins!
Better go now....Tolkien is still recovering from this morning’s traumatic experience (yeah right hoomins, don’t fall for his pathetic excuse, he only went for a small walk, he didn’t even get out of the basket) and hoomins feel rather guilty....opportunity here for extra treats and top ups for meowself I thinkz!


Purrs and meows till next time!
Before I go though I would like to mention once again that my hoomins are trying to raise money to help older cats such like Choo Choo and Faith were with vet bills as their treatments can be very expensive since insurances don’t cover senior cats treatment for life (not fair really as we can live a lot longer now and some of us need medical treatment)...so if you feel generous and you want to help cats like Choo Choo to have a good old age you can donate by clicking here:
Also you can buy some of my own range of products, the Ozzy Superstar range here too: 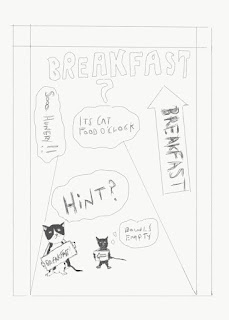