Once upon a time I had peace and quiet at home...then hoomins brought home Tolkien...mistake?

You know it has been now quite a while since Tolkien became an unexpected family member….hmmm... and although I do admit it, he has been somewhat beneficial to my life at home as it was mentioned before...you know when he gets blamed for everything by the hoomins while I get to be praised by them for being such a good boy....he, he if they only knew half the truth....still I’m not so sure about him!

I mean (and although hoomins think he is cute and pretty….well what do they know really?) and as I’ve said it many times before he can be such a hard work to train to behave like a proper cat....Of course and on the other side he is always there when you want to annoy...sorry I meant to play with someone as hoomins are not always available when you want them and he is rather good at chasing and absolutely terrible at hide and seek...you know some times I really despair how stupid he can be...is this common with all kittens? Are all kittens that stupid really? I don’t remember myself being so forgetful and stupid when I was young...but then again I was always the smart one among kittens, big cats and hoomins around of course...But seriously now he is absolute terrible when it comes to hide and seek, especially when it comes to hiding part...he finds the most obvious places and hides some of himself while the rest, mostly legs and tail are out there sticking out for anyone to find...Does he call that hiding? Obviously he hasn’t learned by the master yet (meowself of course) how to hide when playing or when trying to hide from the hoomins....
He is also terrible in copying me...I mean it is quite nice that a young kitten copies everything that I do but it would have been at  lot better if he actually copied what I do correctly....I mean and you probably know by now that my little pastime is spending some quality time in the kitchen sink trying to catch those pesky drops that fall down from the tap, which of course needs quite a bit training and patience so to learn the skill and to avoid getting wet...well, I don’t think that Tolkien has picked that skill quite yet...I mean you are supposed to use the taps in the sinks and not to actually follow the hoomins in the shower while they are having their shower in an attempt to catch the waterfall that comes from the shower head as you are more likely going to get a bit wet, to say at least. He shouldn’t also attempt to catch the water when the hoomins are flashing their own watery litter tray as it is also more likely that you might end up in the toilet yourself (unless of course you are quite lucky and the hoomin catches you before you fall in....).
So yes I don’t think that Tolkien is very good at copying me (or that he understands that water makes you very wet at times) and even at times he even overdoes it as well especially when he becomes almost attached to you especially at times when you try to get some quality snoozing time....he doesn’t really have to sleep next to me or on top of me....I need some breathing space especially when sleeping...and there is plenty of room on the bed or the sofa for both of us!

The other bad thing with Tolkien at the moment is that he is not only forgetful but also that he gets easily distracted....you know, one minute he follows you around and plays with you and the next he forgets all about you and starts playing with one of those toys that hoomins have brought home sometime in the past for meowself and which toys I think at some point in time I got bored with...and now Tolkien finds them interesting to play with....even more interesting than he finds me it seems....if that is possible of course!

But out of all these bad so far learned habits and behaviours there is one good thing about Tolkien especially when he is being so forgetful and so easily distracted.....as at times he even forgets to eat and then he’ll abandon his food rather quickly for something that he might have just seen or heard moving which of course means that then I can help him to finish that abandoned food before it gets wasted!

But I guess I should stop now, after all I have a kitten to look after and as it is his dinner time as well I need to go and keep an eye on him....just in case he forgets again and abandons his food…we don’t want to waste all that food, do we now?

Before I go though I would like to mention once again that my hoomins are trying to raise money to help older cats such like Choo Choo was with vet bills as their treatments can be very expensive since insurances don’t cover senior cats treatment for life (not fair really as we can live a lot longer now and some of us need medical treatment)...so if you feel generous and you want to help cats like Choo Choo to have a good old age you can donate by clicking here:

Also you can buy some of my own range of products, the Ozzy Superstar range here too: 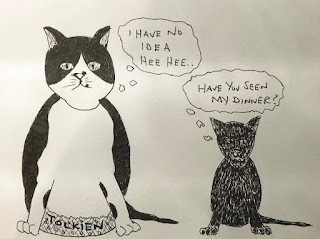