It’s really hard work being in charge of a kitten and the hoomins!

You know, once upon a time I was the youngest of them all, I was the baby in the family and life was very good until and very suddenly, in a very short time, I’ve became the oldest one, the one who is charge of everybody, hoomins and a kitten...I mean I don’t mind the responsibilities involved that much, you know, as you need some one with a bit of intelligence to run things around here these days but having to look after not only my two hoomins but also a very young and rather stupid at times kitten it can be too much even for some one as capable as meowself!
I mean my hoomins are expecting too much from meowself..after all they were the ones that brought Tolkien home and therefore they should be the ones to look after him and not to expect me to to do all the hard work instead....and he is really hard work, believe me!
You know and for one thing he is always there, one minute he is under the hoomin’s feet or close by and the next minute he is on top of me and he wants to play...fighting and he never wants to stop!
Play fighting of course is a very good exercise as you know for everyone especially for us, cats, as you can let out a bit of steam and you can always, well you know put someone in his place when he is too naughty, show him who is the boss around here...Nothing really serious of course like hard biting or fur removing or even scratching....you are careful when playing with another cat/kitten (but no always when playing with hoomins of course…you can be a bit ‘rougher’ in those occasions just to make sure that hoomins know who is in charge of course)....just pretending to fight and doing a lot of rolling around and also making some noises (it’s called energy release hoomins) so to freak out hoomins a bit and to think that we are actually fighting for real....hee, hee! But with Tolkien when playing there is no end to it...you play for a little while, then you stop, having a little rest and a small smack and then you can carry on with the playing if you feel like...but not with Tolkien as when he starts he doesn’t want to stop...for nothing! Not even for a little energy refill, a little snack break! You know it’s not that I’m old or anything but I do like to have little breaks when doing anything that requires some form of energy...it is the natural thing to do but not with Tolkien as he is constantly wants you to play....I even try to hide sometimes but there is no place to hide from him, he always finds you and jumps on you!
And when he doesn’t want to play with me he is then on course to destruction....I mean he is so careless and rough round the edges that whatever he does ends up in disaster...he is a little hurricane our Tolkien (even my hoomins sometimes think that too…we totally agree here)!
I mean he always runs into things because he has no sense of stopping in time before he crushes on surfaces....from one room straight into the cupboards in the kitchen...crash! He never stops on time. Then there is of course the climbing thing...now that he can climb almost anywhere in the house he often finds himself in high places and then he doesn’t know how to get down....he is lucky that hoomins are usually around to rescue him otherwise he would easily have found himself stuck on top of things for hours (hmm not a bad thing perhaps…some precious peace and quiet for a while!).
And of course there is also the chewing of things...I don’t know if this is a kitten thing or teeth issue but he likes chewing everything from cardboard boxes, wires, strings, fingers, toes and my tail and ears...
Yes and by the way what is with Tolkien and my tail...why he likes to play and bite my tail, he has his own, which it is quite long as well, so why this obsession with mine?....ahh kittens....who can understand them? Definitely not me or those silly hoomins who they think they know enough about kittens, if they did they would have managed to control the uncontrollable Tolkien!! Pfff!

Anymeows better go now....it is getting late and it is quiet out there...maybe I can have something to eat without Tolkien playing with my tail this time!
Purrs and meows till next time!
Before I go though I would like to mention once again that my hoomins are trying to raise money to help older cats such like Choo Choo and Faith were with vet bills as their treatments can be very expensive since insurances don’t cover senior cats treatment for life (not fair really as we can live a lot longer now and some of us need medical treatment)...so if you feel generous and you want to help cats like Choo Choo to have a good old age you can donate by clicking here:
Also you can buy some of my own range of products, the Ozzy Superstar range here too: 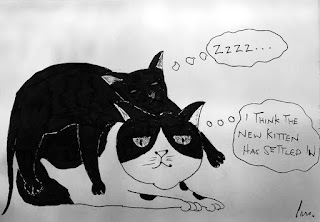