So it appears that the hoomins don’t really appreciate our efforts to entertain them….pffft!

Here we are again and another week has just passed and things were like they were last week and the week before…you know same as it has been for some time now….Except, wait a minute…yes there have been some changes or at least they might be soon if the rumours I’ve heard are true of course. Well things don’t seem to go that well out there in the hoomin world apparently or at least this is what my hoomins are saying so there is the possibility that all hoomins and not just my hoomins might start staying indoors again as it was before so they can look after again properly their dogs and cats…

Which would be a good thing in my opinion as I don’t like it when my hoomins are going outside and spend all of their day doing other things other than staying home and looking after us (well meowself anymeows as Tolkien doesn’t really need a lot of looking after as he is a hazardous cat, a cat prone to accidents and disaster as I’ve mentioned it before many times…by the way you can still read about our life at home and of course all about the good times we’ve used to have at home in the good old days before March when hoomins behaved like hoomins and they’ve used to go outside often...in the hoomins comic Life with Ozzy.. and Tolkien available on Amazon). To be totally honest I don’t like it at all when my hoomins are going outside and spend a lot of their time doing things that they are not really important. I mean what can it be more important than looking after meowself and OK at times perhaps Tolkien too. Who wants to have their hoomins going out for hours to that place they’ve used to call work and leave you with empty food bowls for hours and then and when they do come home sometimes unacceptably late to be tired and not in the right mood to give you the attention you deserve? Nope, not meowself!

This is why meowself and Tolkien are going to all this trouble as I’ve mentioned it last week to keep the hoomins entertained and stimulated when they are at home so they don’t feel the need to go outside for long periods of time and frequently…But of course hoomins being hoomins don’t seem to be appreciating of all our efforts to keep them healthy and happy and they are always seem to be complaining when we are trying to be helpful. As apparently we are always on the way when they are doing exercising while we are only trying to help them to do those exercises the correct way or when we are trying to help them with their work…

But and to honest I don’t always blame them especially when they do complain about Tolkien as he can be sooo clumsy and prone to accidents and whatever he tries to do always ends up in disaster...I mean that cat is so big these days that he is almost an embarrassment to the cat world...cats are not supposed to be so long and clumsy....You know how things are for example when he tries to cover after he has been in the litter tray and he manages to cover the floor outside instead of what is inside the litter tray....Then there is his well known by now dreaded stampede when he gets excited after he has been to the litter tray and then he starts running in the house and he does sound like there is a stampede of elephants in the house....so now the hoomins are calling him little catelephant...Seriously he is so loud when he runs that he does manages to wake the hoomins....and my hoomin that goes to bed really late or early in the morning is not too happy to be waken up soon after she has gone to bed....He is also so clumsy too and even when we are playing and the hoomins are around he tends to cause havoc in his path and knocks things over and hoomins are not that happy....Well he is a lot worse really than you might think and sooo loud that he cannot be compared with my apparent snoring which hoomins are saying is getting worse as it’s so loud these days that they can’t really sleep when I’m snoozing on the bed....really this is so unfair. The hoomins snore too a lot and they’re very loud and I’ve never complained  even when they do keep me awake....As I’ve said it before I do not snore I only purr gently and melodically as I also tend to occasionally meow...really quietly and very cute....like a kitten (why Tolkien is giggling now?).

But and as I’ve said it before hoomins don’t appreciate anything we do and they always find something to complain...

Oh well I guess they can’t really help themselves as they are hoomins after all...but even if they are annoying at times I still prefer it when they are at home...safer indoors than out there with all the other hoomins I say.

Well that’s all for this week.

Purrs and meows till next time then! 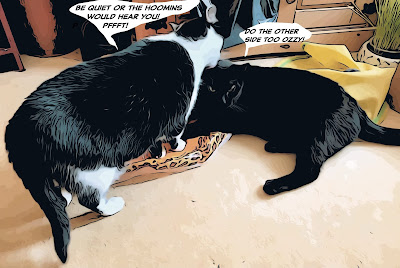