Finally I’ve found my voice and I’m not a bully...

Yeap this week is proving to be a great week after all. Hoomins are still at home of course all day transforming themselves gradually but very steadily so to become soon like us, cats as they have forgotten by now how to be hoomins, well at least like hoomins used to be anymeows!

But of course this is already old news....cathoomins are now a reality as it is my new found voice. Yes finally some great news at last in these strange times....very exciting news indeed.

You probably are aware by now that I’m not a very talkative cat meowself (unlike Tolkien of course who likes hearing his own voice all the time and who he continuously likes to  meow day or night and sometimes for no apparent reason really, just to be heard....by the way you can still read about our life at home and of course all about the good times we’ve used to have at home in the good old days before March when hoomins behaved like hoomins and they’ve used to go outside often...in the hoomins comic Life with Ozzy.. and Tolkien available on Amazon ).

I have always been a rather silent cat who very rarely complains loudly or otherwise about anything as and instead I prefer to suffer in silence. You know talking has never been my style... there is no need really to use vocalisation even for the hoomins benefit as they seem to understand me quite well without the need of much ‘talking’....you know you only need to look at them and play the cute card by exposing your belly while rolling around a bit and they then know straight away what they need to do. I must admit thought that it took meowself quite a while to train them to be that responsive but in the end all my hard work and effort paid off and now they always know what I want them to do and when I need it to be done....

Of course Tolkien is a totally different cat as he tends to use a lot of different meows to get the hoomins attention which they usually work… well at least mostly as sometimes his constant meowing seems to have the opposite effect and hoomins instead tend to ignore him....I have tried to teach him the silent way but he doesn’t seem to be able to understand how to play the cute card with the hoomins and his attempts sometimes end up in disaster....oh the times he has fallen off things while he was trying to show his belly to the hoomins are far too many for meowself to even remember them.... So yes I’ve always thought that meowing wasn’t really for meowself and to be honest I had never really attempted to do any meowing at any time.

But things changed the other night when I was testing my vocal cords and then suddenly and unexpectedly I’ve heard meowself meowing....it was really magnificent....so exhilarating to hear my own voice in the quiet of the night when everybody else was sleeping. You see and to be totally honest I wasn’t sure that I could meow at least properly that is as I had never really tried or felt the need to do so. But now that I know that I can I do admit it that it feels great to be able to hear one’s cat own voice....Of course I’m not planning to start now constantly meowing like that silly Tolkien does but it is nice to be able to do so when you feel like, you know to be able to do late night singing for example for your own pleasure.

By the way this is the only thing that I do when the hoomins are asleep and I don’t chase around the house Tolkien or bully him as hoomins think that I do....so absurd! As I’ve mentioned it before we are only having a little bit of fun chasing around the house and we are most definitely not playing rough....Tolkien is a drama queen and he squeaks and meows for no really reason....it’s all an act. Also I want to explain that my hoomins haven’t caught meowself as they are saying in the act of pulling and eating Tolkien’s fur. I do not eat fur....why should I eat Tolkien’s fur? It doesn’t even taste nice....they are all rumours and lies I can tell you that!

Anymeows better go now it is getting late and I have some things to do....not to bully Tolkien or eat his fur of course! 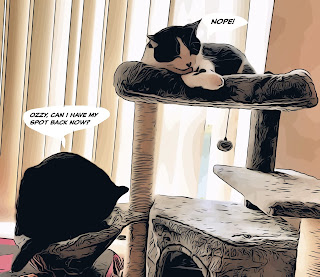