The battle for the new scratching post has started and the winner…meowself of course gets the hammock!

So here we are again another week has just passed with the hoomins as always at home and a new one has just started and which it looks to be rather interesting...

You see rather unexpectedly the hoomins decided to get us a new scratching post/tree with different platforms, a cosy home, bed on top, scratching surfaces and a nice purrfectly fitting new hammock, much better than the old one of course!

It is true that the old one (which hoomins have now placed in a nice and more secure location in the bedroom so we can still use it if we want…I’m sure it’d get some use especially early in the mornings when the hoomins are still asleep…you know so to keep ourselves busy of course) had become a bit unsteady (of course I blame Tolkien for its condition as he kept jumping on it while he was chasing meowself and he is after all a big and rather heavy stoopid cat, a lot bigger than meowself despite what the hoomins think....I’m not fat, OK?). It was also a bit old, we had it for a long time now, way before Tolkien (BT) arrived (by the way you you can still read about our life at home and of course all about the good times we’ve used to have at home in the good old days before March when hoomins behaved like hoomins and they’ve used to go outside often...in the hoomins comic Life with Ozzy.. and Tolkien available on Amazon )!

So yes it had seen better days (I do actually remember when the hoomin put it together when we had just moved here, the old good days when it was for meowself only, my scratching post/tree....well the others at the time were rather old and not interested in high place....although Choo Choo would sometimes climb on it to look outside the window...).

So I guess it was about time to be replaced with a newer version and of course I’m glad that hoomins finally saw the light and decided to replace it....but of course it would have been a nice surprise and with no issues developing whatsoever if it wasn’t for Tolkien....that big, stupid still thinking he is a kitten, cat!

The tree arrived today and the hoomin soon after put it together  of course....he knew that we couldn’t wait to have our new tree and to use that roomy new box of course! Well at least Tolkien that is as he is obsessed with boxes not just for sitting inside but also for eating and chewing....even the robot vacuum cleaner seems to have figured out that Tolkien chews boxes and makes a mess in the process so he (hoomins have given it a name and I think it is a boy name too....well in my opinion he has more purrsonality and he is a lot more intelligent than Tolkien anymeows!) keeps following Tolkien around the house so to clean after him....this is why he takes so long to clean the house....it is Tolkien’s fault of course, he makes so much mess!

Hoomin of course took quite a while to put the tree together and he was also getting a bit annoyed too...and to be honest I don’t understand why he was getting upset.....and in particular why he was getting annoyed with meowself and Tolkien as we were only trying to help him to finish sooner anymeows! Those hoomins they don’t appreciate anything that we do it seems....

So and finally the tree was done but then the hoomin decided that the hammock was a bit too high so he undid it again, well the top part anymeows and then he put the hammock a bit lower this time....Still I think that he took far too long to finish it....he shouldn’t have taken that long in my opinion....it was an easy and quick job and if I had thumbs meowself I would have shown to the hoomin how it is done properly and faster!

So the tree was finally put in its place and meowself decided to try it....and I can tell you with certainty that this a much better tree, I like it! Perhaps not so tall as the other one but it has a very comfortable top bed and of course an even more comfortable hammock than the previous one.....and this is what caused all the trouble as both meowself and Tolkien wanted to try the new hammock....of course and since I’m the older one here and the one in charge I was supposed to be the one who would try the new hammock first....but no, Tolkien wouldn’t let go and he was kept pestering me to move so he could sit on it too....Noway....my hammock I say!

Finally and after a lot of persuasion he eventually gave in and he decided to leave me alone and to try instead the bed on top which now he seems to like (despite the fact that he nearly fell off at first....too many legs and tails to fit all in!). So now he has decided that he prefers the top bed after all so I can have the hammock all to meowself! Finally!

I wonder though whether that top bed is really comfortable....it most certainly looks rather cosy....maybe I could try it meowself when Tolkien leaves....first gets there stays there I say!

I’d let you know next time!

Till next time purrs and meows! 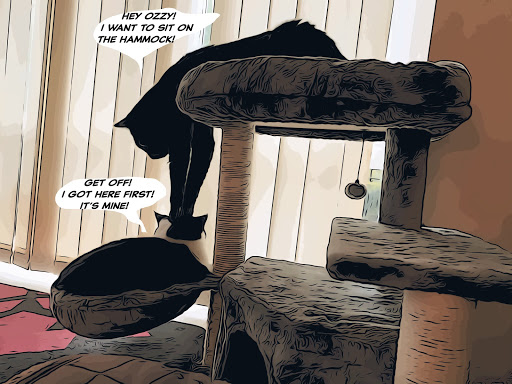