Tolkien is one year old....how time flies even when the pesky hoomins are still at home!

Yeap it is true....Tolkien is one year old... since Sunday the 10th of May....How time passes even when you don’t have fun and you have to cope with hoomins being constantly at home and getting on your nerves sometimes and being sooo clingy and always everywhere you go....well, at least the other times they can be somewhat useful…keeping your food bowl full and entertaining you when you are really bored!
So yes I couldn’t believe it when when the hoomins started talking about Tolkien now been one year old and they were also making all that fuss about it like it was such a big thing! You know it’s Tolkien after all so there was no need for all this over the top behaviour from the hoomins…you know when they often over reacting about almost everything and behaving in a rather silly way…when they keep saying things like....’oh our kitten is a big boy now....hasn’t he grown?’ Well, you know the rest…

Of course Tolkien has grown, he is not a kitten anymore, he is not weeks old or even months old anymore....now we can at last start counting in years his age and stop saying that he is just a  kitten and then let him get away with everything he does because he is just a kitten…  finally!

But and to be fair hoomins have a valid point here….he has really grown. I mean I can’t really believe how fast this year has gone....I still remember seeing him for the first time when he was a few weeks old. A rather skinny little thing with those big ears, out of proportion big legs and a massively long tail....he looked like a bat with a tail and no wings....boy was he ugly! Despite his real ugly appearance though for a kitten hoomins were kept telling him how cute he was....you know they were telling all these lies because he was still quite small and he was feeling rather scared finding himself suddenly in a new home with new hoomins who although they were trying their best to make him feel at home they were new hoomins to him after all  and he was in a new and probably rather scary environment even if he was too young and stupid to care that much....He was a kitten after all and everything new after 5 minutes is exciting and worth investigating....oh to be young and that stupid like Tolkien once was again! (You can read al about the good times we used to have at home before Tolkien became a full grown pesky cat in the hoomins comic, Life with Ozzy.. and Tolkien available on Amazon).
But he was lucky that the my hoomins adopted him and that I was of course also around....because I did feel sorry for him and also and because I’m a kind and considerate cat I’ve accepted him straight away and welcomed him into my home...
Of course things would have been a lot different if I was a different cat and had decided that I didn’t want a kitten to invade my home....after all kittens can be hard work to train and teach them how to be proper cats and not all cats can take a youngster under their paw and try to train him the ways of a cat like meowself....you know to be a responsible cat that knows how to look after himself and his hoomins of course!
Tolkien on the other hand was never the easiest kitten to teach anything at all....you know how some kittens can be....no brains and very stupid....yes Tolkien always had been a kitten with no brains who thinks that everything is a game and would try everything and go everywhere and get everybody else (well usually meowself of course) into trouble. So and despite all my efforts and to some extend hoomins too he never really learnt anything really despite all our efforts and he would always somehow manage to get into some kind of trouble which of course it was never my own doing....
We kinda hoped of course that as he would get older he would start at least learn some basic cat skills like for example how to cover after he has been to the litter tray....but as I’ve said it before unfortunately he is Tolkien, a different type of kitten, one with no  brain it seems. So and no matter how many times I’ve shown him he still hasn’t figured out how to cover properly so I have to cover for him every time he visits the litter tray....such a disgrace for the cat race really when he can’t do even the simplest thing that a cat should be able to do....He still hasn’t figured out how to convince hoomins to feed him when they go to the kitchen….he simply just spreads himself on the kitchen floor and tries to trip over the hoomins or attacks their feet and bothers them instead of convincing them that he is really starving and he needs urgently food….hopeless, really!
Yeap,Tolkien is still Tolkien and despite the fact that he isn’t that small any more and his ears don’t look that big anymore he looks kinda cute and can be convincing if he tries the cute card with the hoomins…
But what can you do? He is Tolkien after all and he is part of my family....like those pesky hoomins who are staying at home all the time these days. At least hoomins can be useful I guess....as for Tolkien...well he is at least entertaining and keeps the hoomins amused and meowself at times company...
So Happy Birthday Tolkien


Purrs and meows till next time
Well and if you want to check that comic...Life with Ozzy and.. Tolkien is now available on Amazon
There are also new range of products bases on our new comic Life with Ozzy.. and Tolkien available to buy ... The Comic Collection
Also and if you feel generous and you want to help some of our senior cats with their vet bills so they can have a good old age you can do so by donating: So please click here.
Don't forget to check my hoomin's site on Cat Behaviour if you want some advice...hoomin says that I am really good at giving good advice to hoomins! 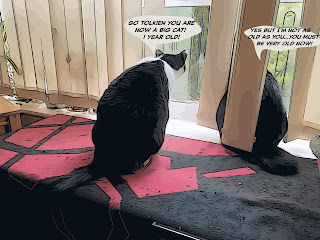