Well I guess I should carry on telling you some facts about my daily life as you probably don’t really know what some of us, cats, do during the day at home when our hoomins are not around all the time…it can be rather annoying when there are so many misconceptions about what a cat does during the day as hoomins believe that we simply don’t do much. Well they are clearly wrong…I mean we don’t actually spend all our days snoozing…that’s just not true…totally.
I should start perhaps from the beginning, how my day would normally start but I feel that the ritual of getting up and helping my hoomins wake up and get ready for their day is a totally new story on its own which it would need telling at some other time as getting up it’s a rather complicated process when you include the hoomins that they are involved.
The fact is though that during the day, any normal day, sometimes things do happen rather unexpectedly and change the normal day to day routine. For example what happened earlier today, was not on the day’s schedule.
As I’m of course the appointed guard of our home I often check what’s going on outside by keeping watch at the windows, especially the window in the living room where are bird feeders. I kinda like these feeders as they seem to attract a lot of small birds which they are kinda cute to watch and by no means make them want to catch them…I do not hunt cute birds or small animals…I think the act of hunting is cruel and unnecessary as I don’t need to hunt live creatures to eat or play with. I’ve got plenty of tasty food and toys to chase and play with…So I don’t see the need to chase living creatures for fun…it is cruel and pointless..You see hoomins not all cats, especially cats like me who have lived indoors all their life and never had to chase and catch living prey have any urges to actually hunt small creatures…I like watching small birds coming to the feeders or watching those fish creatures going round and round in their glassy watery box ( actually and to be totally honest I don’t even like watching them, it is sooooo boring!) and it doesn’t bother me in the least when that small furry creature, who has not tail and doesn’t look much like a cat, despite his soft fur, runs around the house in his ball…boy he is fast though…considering that he has such small legs…The same apply to the other cats that live here too, no interest whatsoever, not even to the birdies outside, they are soooo lazy really…sometimes I wonder if they are actually cats at all!! Hmm anyway this is something to discuss some other day.
But now back to my today’s story…as I was saying I was today on my usual daily keeping outside a look routine and looking out for small birds when that fluffy tailed creature came out of nowhere! It kinda looked like the small fluffy not cat creature that lives with us in his plastic box but this was was a lot bigger and with a very fluffy tail…
You see the thing is that the bird feeders are quite high on the window and it is almost impossible to get to them unless you are a bird and have wings… So how on earth this creature got there…One minute the bird feeder was empty and the next this fluffy thing appeared, eating away bird seeds and fatty ball and looking very ignorant to the fact that he was being watched by a cat (myself) and hoomins who came to watch as well…Seriously how did he get there? Can these long fluffy tailed creatures fly? And if so where are their wings? They don’t seem to have wings more like small hands like my little no cat fluffy friend who he uses to eat his food…kinda cute really!
It spend quite a while sitting and eating in the bird feeder totally ignorant to us and eventually took a bit chunk from the fat ball, jump off and disappeared in the bushes opposite…But I’m pretty sure though that this is not the end and he would visit again and he’d probably bring his friends and family with him. But I’d keep on eye for him, you’ll see. He might be cute with that bushy tail but nevertheless he is a thief that steals food from the little birds and he should not be allowed to get away with his thieving behaviour….I would see to that, so there, the nerve!
Anymeow I better go now but don’t you worry I’d keep on eye for this thief and I would let you know if he comes back again…because if he does….hmmm I have no plan for the moment but I would think of something…I just can’t let him carrying on stealing food that it’s not his… 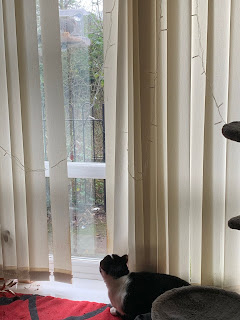 Bye for now, must return to my watch post!!!